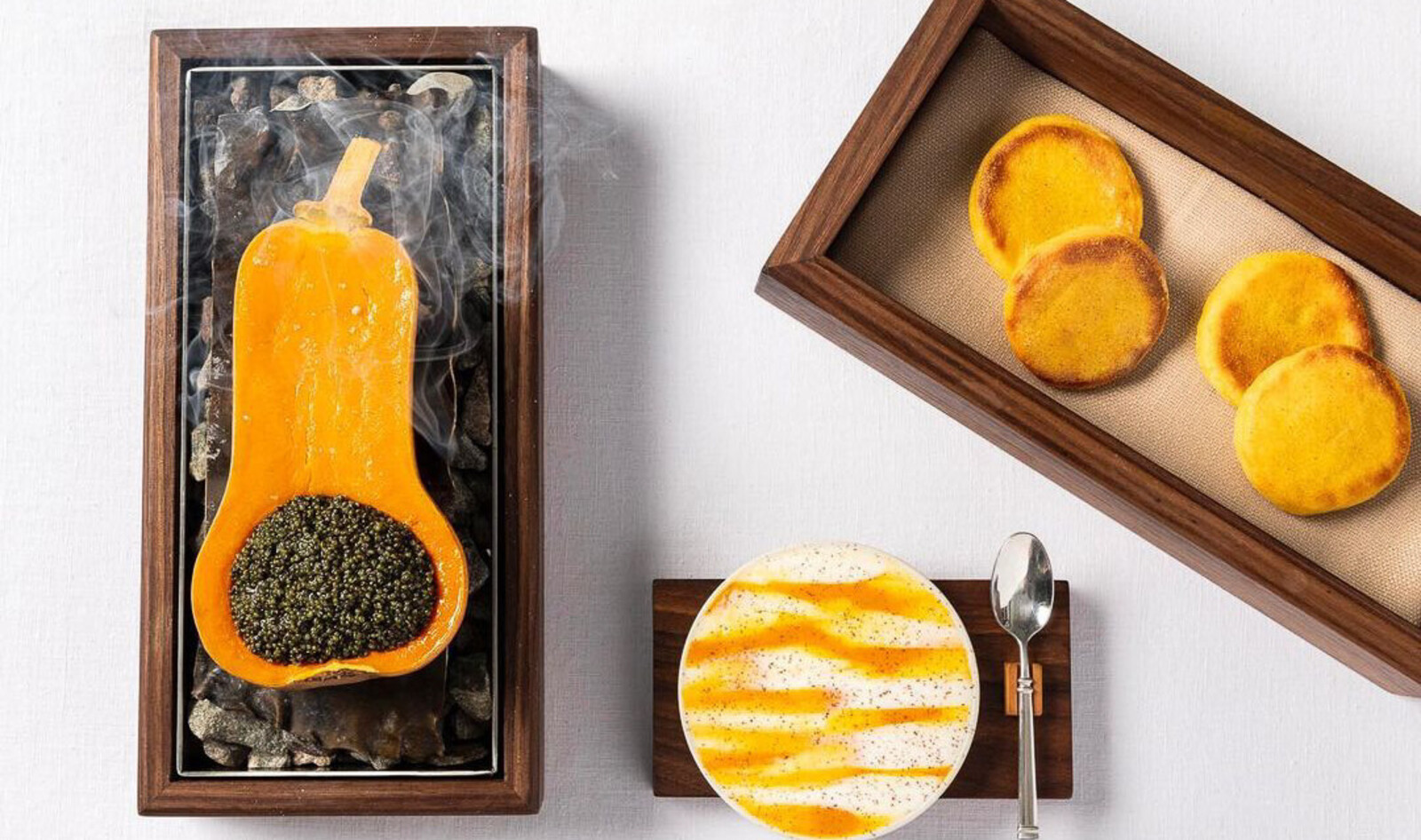 We’ve all had a vegan cheese that didn’t quite deliver when it came to flavor, melt, or texture. One Brooklyn biotechnology company, Kingdom Supercultures, is working behind the scenes of the food industry to make sure that future formulations of products such as vegan cheese, meat, and a host of other goods are delicious, nutritious, and free from additives—all with the transformational magic of microbial fermentation.

Food industry customers come to Kingdom Supercultures looking to improve their products and the company gets to work on a custom solution using its database and technology. To make its database of cultures, the company sourced thousands of fermented food samples—from kimchi to cheese to sauerkraut and more. Then, they pulled out a collection of microbes with unique functionalities and created a map that the company now uses to match each problem with potential culture solutions that can help deliver desired results with the help of computational technologies.

“We focus on designing and delivering new microbial cultures as core natural ingredients for the food system,” Kingdom Supercultures co-founder Ravi Sheth tells VegNews. “We basically go out and find the millions of cultures that already exist in the food system and we characterize them, combine them intentionally, and deliver them as these new core ingredients that can remove artificial flavorings and chemicals from the food system and add new functionalities, tastes, and flavors, along with health properties to food, and do this all in a natural way that doesn’t require artificial chemicals, genetic modification, or anything like that.”

The company works with a range of customers, from large food corporations looking to create more natural product formulations to small food innovators in the plant-based alternatives space. With the latter, Sheth says Kingdom Supercultures has helped these companies in several ways. “We’ve worked with a number of players on new cultures that make plant-based foods taste better, drive more dairy-like flavors, remove off flavors from plants, and just improve their general functionality,” he says.

Animal-free dairy made better with microbes

How can microbial fermentation make for better vegan dairy? Sheth says the main challenge lies in taking new bases such as seeds and oats and making them taste like something that has traditionally relied on the complex protein matrices of animal products. “That’s a really hard problem because we’ve spent hundreds of years as a society perfecting dairy fermentation and now we want to create new types of products on demand from all types of bases,” Sheth says. “No longer do we have just milk but we’re trying to ferment all these other things. And that’s a really exciting problem our technology can solve.”

He gives an example of an oat base with coconut oil—typical of what a vegan cheese or yogurt can be made from. What Kingdom Supercultures can do here is run its technology through it to understand which cultures best optimize this base to deliver the desired end product. “The high-level problem that I think is really exciting is that we spent a lot of time as a society inventing all of these food products like brie, Swiss, and cheddar cheese,” Sheth says. “These are all things that took people hundreds of years to perfect. And it’s amazing. You can get all of these flavor profiles that change across different countries. It’s a very hard invention process.”

When it comes to taking the animal milk out of this equation, Sheth sees an exciting, albeit challenging, opportunity to apply what we know about fermentation to plant-based cheese, making a creamy and funky vegan brie a feasible end product. “It’s almost magical to see what we’re able to do,” Sheth says.

“We take these starting bases and products and run them through our work and the outcomes are things that taste dramatically different. [We’re] really solving some of the big remaining problems to get plant-based foods out to a much broader audience and making things that actually taste great,” Sheth says

Kingdom Supercultures is also solving an important problem for companies that want to scale new products but have limiting factors such as access to the right microbial cultures that shorten production time and optimize all of their desired elements. “We get to focus on inventing amazing taste, flavor, and function and we work with awesome partners to bring those products to the world,” Sheth says. “It’s kind of like a Willy Wonka factory for taste, flavor, and functionality. It’s really fun to create entirely new types of foods and flavors and tastes.” This technology is also used for extending the shelf life of products, thereby reducing food waste.

And while the process is complex on the part of Kingdom Supercultures, the solution it delivers is simple. “The output of all that is a little sachet that our customer can use to make their product,” Sheth says. “It’s an amazing amount of R&D work and discovery but the output is a very simple ingredient that gets mixed with the customer’s set of ingredients and ferments to make this delicious tasting product at the end of the day.”

Kingdom Supercutlures focuses most of its energy on optimizing consumer goods but its technology has the potential to transform the future of fine dining, as well.

Last June, chef Daniel Humm rocked the world of fine-dining when he announced that Eleven Madison Park—one of the best restaurants in the world—would emerge from a pandemic-induced hiatus with a new plant-based menu. Humm made this decision to bring the restaurant into what he believes will be the next era for fine-dining, a part of the culinary world that has thus far focused on the indulgence of consuming pricey animal products at the expense of animals and the environment. After the announcement, Humm was bombarded with both praise and criticism, the latter hinging mostly on how the chef could justify a $335 per person tasting menu that centered squarely on vegetables.

However, guests that have since sampled the new plant-based menu quickly came to realize that what Humm and his team are serving at the new Eleven Madison Park was more than just steamed broccoli but courses that meticulously bring out the goodness of what the Earth has to offer, using techniques and tricks that, for some, justify the price tag.

Perhaps one of the most magical dishes that the new Eleven Madison Park serves is the signature sunflower butter. This dish was created with the help of Kingdom Supercultures, which worked with Humm to develop this unique offering, along with its other dairy-like vegan ingredients such as butters and crème fraîche alternatives.

“We’re very much at the beginning of a very long journey here” Sheth says about the potential of microbial fermentation. “People have been consuming microbes for thousands of years. Fermentation is a core part of human society but we lost a lot of that art and practice. That’s a lot of the work that we think about. Rediscovering things that we’ve been using for a long time but approaching that with modern technologies and approaches.”

Transforming the future of food from microbes

Kingdom Supercultures is a company operating behind the scenes to perfect the animal-free future of food. And while Kingdom Supercultures offers custom solutions with its expansive database, other companies are working to draw out the potential of singular microbes. One example is Delaware-based Superbrewed Food which recently announced a major partnership with Bel Group, the French cheese giant behind recognizable brands such as BabyBel, The Laughing Cow, and Boursin—all of which the company has either launched in vegan format or is working to develop.

For Superbrewed’s part, the company is working with Bel Group to explore the potential of its postbiotic protein—a transformative ingredient isolated from the digestive systems of herbivores. “Animals are bad middle men to do conversion of plant-based ingredients into what we think is a more nutritional set of foods,” Tracy previously told VegNews about traditional animal agriculture. “We can be more clever.”

And the future of food, Sheth says, is full of clever and diverse possibilities because the stronghold of major corporations has in some way begun to lift, opening space for innovators to start companies that resonate with consumer needs. “It’s easier than ever for people to start food brands, and consumers want very different things,” he says. “What’s exciting about the food space is this explosion of different options and brands. It really starts to challenge the way the food system has worked thus far, which has been defined by retail and very large conglomerates. It means ultimately consumers will get products and options that are much better and more responsive to their needs.”

For the latest vegan news, read:
Vegan Brands Battle It Out for Chance to Be on New ShowSkinless Chicken Breast Gets a Vegan MakeoverAmerican Heart Association Says Meat Is Healthy. Lawsuit Says It’s a Lie.