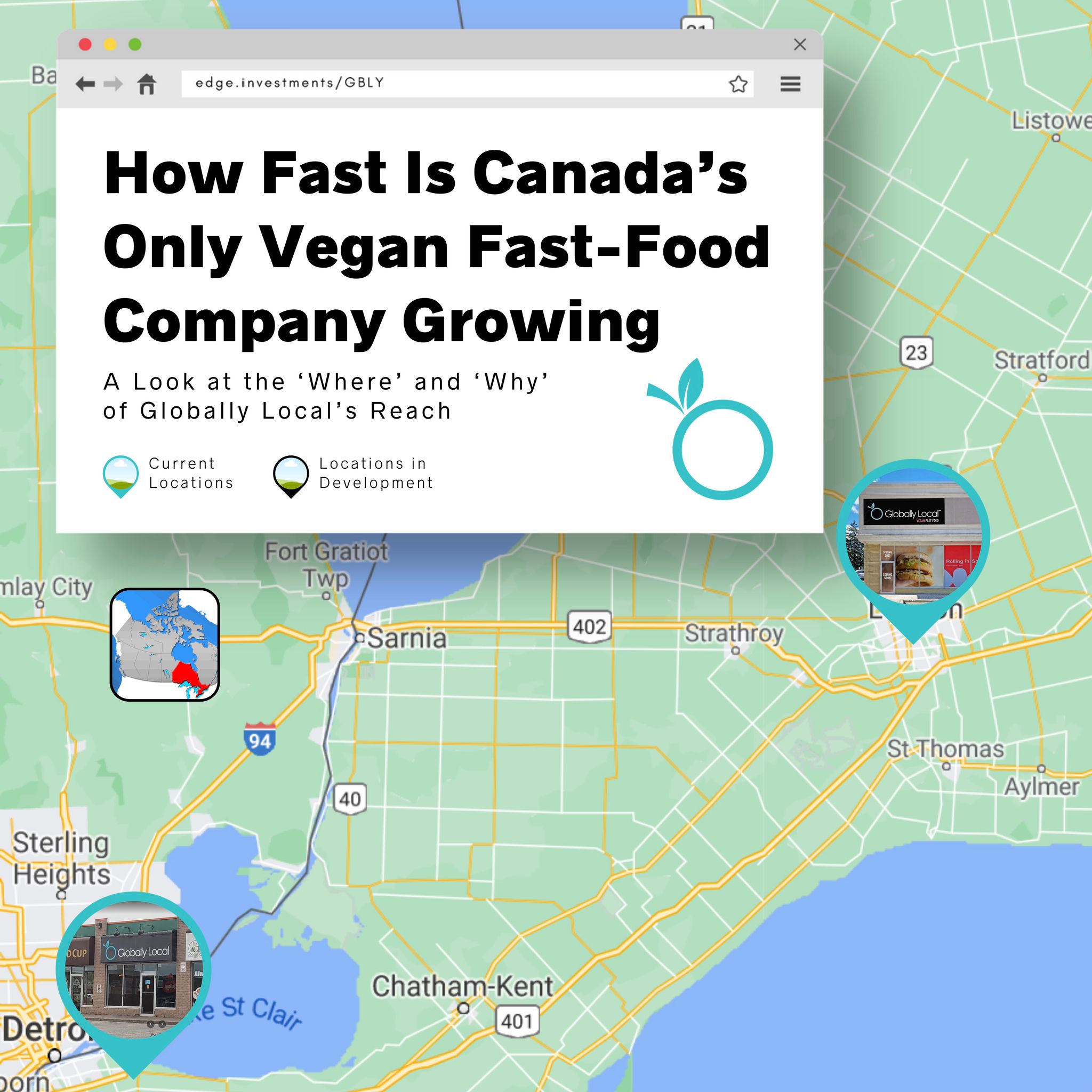 Hearing the words “Canada’s first vegan fast-food company” is enough to excite us. Especially considering this company even has some 24-hour locations.

When the concept of fast food is completely void of any environmental or animal welfare-related guilt, it tastes a lot better for some reason.

Being the naturally curious cats we are, we had to dive a little further in.

Today, we focus on how quick this “vegan McDonalds” is expanding, and where they’re going next.

How many locations can they scale in a year?

Why are they choosing these particular areas?

Is the population steadily growing in these areas? Or is it just the food trend?

We’ve put together a quick update and observation report on Globally Local (CANADA: GBLY) and what 2021 has in store for the market.

We’ll start with the fact that opening 5 new locations in a year (after having just 3) is a blistering pace of growth.

However, with the blueprint that Globally Local has laid out, it’s no surprise that scaling can happen so swiftly.

Let’s go over it again for those of you who may have missed our initial report on this vegan fast-food powerhouse.

This is where all the magic happens. All the various sauces, “beef” patties, “chicken” nuggets, and every meat and dairy-free rendition you can think of, gets conceived here.

The products are made and put together in a “pre-meal” format, then shipped off to the next stage of the process.

While their sole production facility can supply several retail locations, additional facilities will be needed as they continue to expand across Canada.

This is where the magic meets the consumers.

Everything shipped from Globally’s production facility is done so in such a fashion that meals ordered from customers can be prepared in 60 seconds. This is how the retail locations can be run with such a lean staff, saving an enormous sum of money in overhead.

The roster in each location consists of 2 back-of-house staff preparing the products, and 1 point-of-sale staff member at the front, taking orders.

All locations are chosen carefully: they must have easy street level access (to create ease of process for food delivery) and be in a high-traffic, densely populated area.

The micro-analysis of areas in which Globally decides to break ground is important. However, the municipalities must be chosen with careful thought as well.

Although Canada, as a whole, is growing every year by a rate of just under 1%, certain areas see faster rates of growth.

Being in every single city is quite the dream for all companies in this sector, however choosing the cities that grow the fastest is key when maximizing growth and leverage.

We’ll note that the 5 new cities Globally is expanding to this year have an annual growth rate that ranges from 2.3%-4.6%.

This represents a rate of population growth that is 50%-200% higher than the rate of Ontario, as a province.

With Ontario posting a 1.7% annual growth of population, it proves that Globally has strategically chosen cities and jurisdictions that are growing faster than your average. Being choosy is important when scaling, and the team at Globally seems to be ensuring all moves are well thought through.

Disclaimer: Globally Local is a communications client of Edge Investments, and we own shares in the company.  …   …

Is Big Pharma Starting to Adopt Cannabis? – A Closer

In Case You Missed It – Narrowing In on the

The post How Fast Is Canada’s Only Vegan Fast-Food Company Growing? – appeared first on Edge Investments.