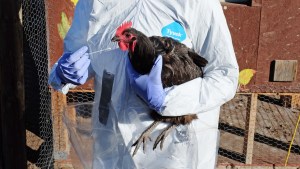 Last week, the UK Health Security Agency (UKHSA) confirmed a case of avian influenza (bird flu) in a person in the South West. It’s assumed they caught the virus from infected ducks kept in and around their home. The government says the risk to the public is low. But it warns that people should not touch sick or dead birds.

Should we be worried and what can we do?

Avian influenza is a type of flu that spreads among birds but has also infected humans. The H5N1 strain spreading globally is a particular concern. This is because it is very contagious among birds. And, can sicken and kill domesticated species including chickens, ducks, and turkeys.

Bird flu in the UK

The UK is experiencing its largest-ever outbreak of bird flu with new H5N1 cases in captive birds being reported almost daily.

Since late October 2021, over 70 premises (mainly commercial poultry farms) have been affected.

In Lincolnshire alone, where there is a high density of poultry farms, about one million birds have been culled to stop the spread. This is according to the BBC.

Avian Influenza Prevention Zones (AIPZs) and strict biosecurity measures to limit the spread of disease came into force across the UK from early November last year.

On November 29 it became a legal requirement for all birds (including free range and small backyard flocks) to be confined indoors, effectively in lockdown.

But it’s not working.

Since mid-December, a cluster of 10 outbreaks near Alford, East Lindsey in Lincolnshire indicate a likely breach of biosecurity measures.

The virus can spread from bird to bird by direct contact or through contaminated body fluids, feces, and feathers. It can also be spread by contaminated feed and water. Or, by farming equipment, vehicles, clothing, and footwear.

Although it mainly infects birds, H5N1 can infect many species including humans. And when it does, cases fatality rates can be high.

The World Health Organisation (WHO) says that globally, from January 2003 to December 30 2021, there were 863 cases of H5N1 in people reported from 18 countries.

Seasonal flu kills around 0.1 per cent of those infected. Most cases resulted from people handling, slaughtering or eating infected poultry, with just a handful of person-to-person infections among families caring for sick relatives.

The reason H5N1 does not spread easily between people is because it has not acquired the ability to be transmitted by aerosol or in respiratory droplets like seasonal flu or COVID-19.

However, scientists warn that it may only take a few mutations for the virus to attain airborne transmission.

We’ve all seen how viruses mutate – the Omicron variant of the SARS-CoV-2 virus, for example, is much more transmissible than the Delta variant.

Flu viruses constantly change through the random accumulation of mutations in their genes. This is why new flu vaccines are developed every year – to tackle new versions of the virus.

Professor Isabel Oliver, chief scientific officer at UKHSA, said: “Currently there is no evidence that this strain detected in the UK can spread from person to person.

“But, we know that viruses evolve all the time and we continue to monitor the situation closely.”

3 steps away from a pandemic…

In other words, the human flu viruses that caused pandemics over the last 100 years, including the 1918 Spanish flu pandemic, originated from avian influenza viruses.

So, how close is H5N1 to becoming a pandemic threat?

Senior public health expert at WHO, David Nabarro, warned that should it mutate and become more transmissible, a pandemic caused by H5N1 could result in the deaths of anywhere between five and 150 million people.

It’s hard to imagine such devastation.

Writing in the journal Emerging Infectious Diseases, scientists said: “If this virus acquires human-to-human transmissibility with its present fatality rate of 50 percent, the resulting pandemic would be akin to a global tsunami.

“If it killed those infected at even a fraction of this rate, the results would be catastrophic.”

What can we do about it?

The poultry industry likes to blame the spread of bird flu on migratory birds. So far this winter, over 300 wild birds have been found with the disease at more than 80 locations.

The real problem, however, is factory farming. Whilst wild birds undoubtedly contribute to the local spread of the virus in the wild, it is human commercial activities, particularly those associated with poultry, that are the major factors responsible for the global spread of bird flu.

The steady rise in cases begs the question, are poultry farmers taking the government guidelines as seriously as they should be?

It would seem not.

Juliet Gellatley, founder and director of Viva! says:”It is trading live animals in markets that caused bird flu to mutate from originally harmless forms in wild birds to deadlier versions.

“And now factory farms provide an ideal breeding ground for a future pandemic. Viva! have been into these hellholes and exposed the horrific conditions these birds are forced to endure during their short lives.

“Over one billion chickens are slaughtered for their meat in the UK every year. And, around 95 percent are intensively reared on factory farms.

“There are 24 billion chickens in the world – more than three birds for every single person on the planet. Whichever way you look at it, domesticated poultry are massively over-represented among the world’s bird population.”

Chickens are raised in closed, filthy, stressful, and crowded industrial facilities with little or no natural light. This is important as UV light harms viruses.

We are literally handing viruses the perfect opportunity to mutate into more deadly forms – a perfect storm of our own making.

The scramble for a universal flu vaccine has already begun, but there is a far simpler solution.

We could just remove the viral reservoir and end factory farming before it ends us!

The post How Bird Flu Could Become A ‘Global Tsunami’ Affecting Humans As Outbreak Rages On appeared first on Plant Based News.