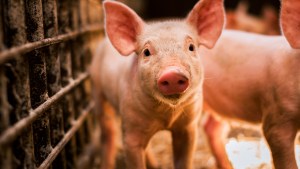 African swine fever (ASF) has been detected at a pig slaughterhouse in Thailand. It’s the first-ever official confirmation of the disease in the country, and comes as the deadly virus continues to sweep across the globe.

An investigation kicked off following reports that the swine fever was wiping out pig herds across Thailand while authorities allegedly attempted to conceal the catastrophe.

Officials took blood samples from pigs at ten farms and surface swabs at two slaughterhouses. One sample out of the 309 collected tested positive for ASF.

The highly contagious, fatal disease cannot currently be transmitted from animals to humans, and is not considered a food safety issue.

However, the World Organisation for Animal Health (OIE) says the disease is a “major crisis for the pork industry,” and can be devastating to biodiversity.

Pigs suffering from AFS can experience high fever, weakness, skin lesions, diarrhea, vomiting, and difficulty breathing. There is no treatment or effective vaccine available, and some animals can die within a week of infection.

According to a government spokesperson, more than 500 million pigs have died due to ASF, Bloomberg reports.

Sorravis Thaneto, director-general of the Department of Livestock Development, spoke about the Thai outbreak during a news conference.

Thaneto confirmed a disease outbreak zone will be established within a five km (three mile) radius from where the positive sample was found. Transportation of pigs will be limited, and animals who may be infected could be killed.

Last year, more than 159,000 pigs were killed between March and October to prevent ASF, a government official revealed.

The cabinet announced it will financially support farms affected by the outbreak. Specifically, $17.15 million will be given to smallholder farms in 56 provinces where pigs have been, or will soon be, culled.

The issue has affected pig meat supplies in the country. This year, Thailand is predicted to “produce” 13 million pigs, a noticeable decline from its usual 19 million a year. As a result, prices for pork products are surging.

The virus’ potential to spread rapidly remains a major concern. ASF was first detected in Paya Mengkuang in Malaysia at the end of last month. Within two weeks, 19 of the area’s 35 pig farms had been infected, leading to the culling of 13,000 pigs via a high concentration of carbon dioxide.

The surge of global ASF cases within the pig meat industry follows similar outbreaks in other sectors.

Across the world, chickens in the food system are falling victim to outbreaks of bird flu. Earlier this month, the Netherlands revealed approximately 190,000 chickens would be culled after the H5N1 bird flu virus was detected on a farm.

Around the same time, the UK reported its first human case of the deadly strain in the midst of the country’s “largest-ever” outbreak.

Officials maintain that bird-to-human transmission of the disease is extremely rare, but more than 700 cases of human infections have now been recorded around the world.

Meanwhile, fur farms are being forced to shut down – in some cases, permanently – over COVID-19 concerns. The fur trade and broader wildlife trade has been pinpointed as a risk factor in spreading the virus.

Along a similar vein, animals kept in zoos across the world are contracting COVID-19, predominantly from their zookeepers.

And yesterday, reports emerged that 2,000 small animals, such as hamsters, would be killed in Hong Kong after testing positive for COVID-19. The decision was made after a pet store employee tested positive for the virus.

Opponents of humankind’s exploitation of animals have questioned whether these species would be contracting and spreading such diseases if they were left to live their lives naturally, without human intervention.

The post Horror As Swine Fever Hits Thailand For First Time, With Millions Of Pigs Dead Worldwide appeared first on Plant Based News.