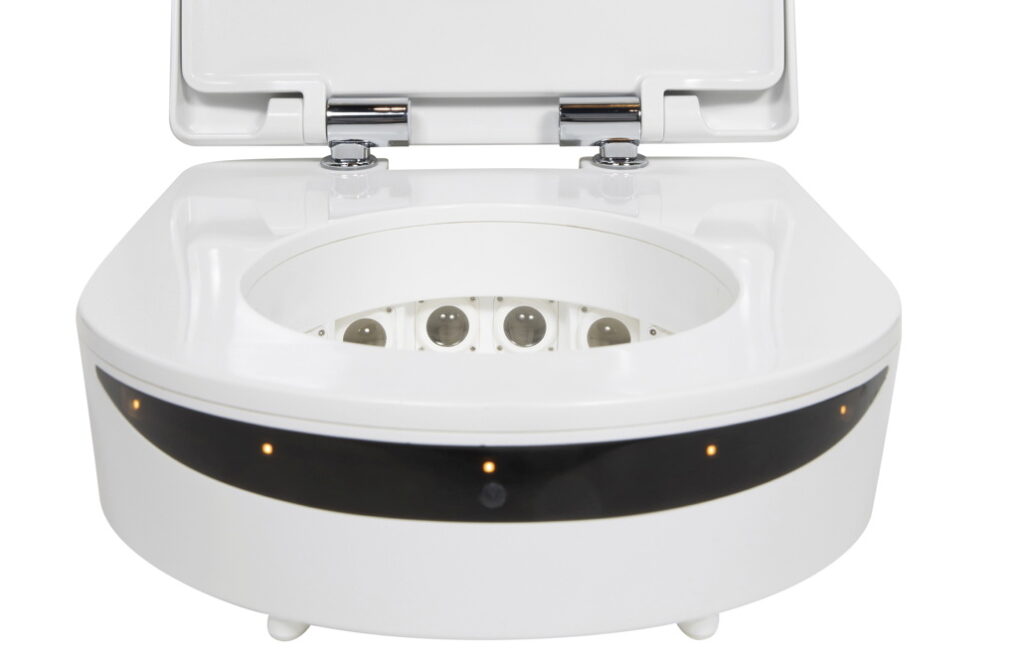 Optical sensors analyze the flow of urine with every visit, to allow early diagnosis

Sensors fitted to a toilet seat are able to measure the way light reflects off the flow of urine in real time, allowing for the accurate diagnosis of a range of illnesses.

They optically analyze the 3,000 molecules contained in urine – each of which interacts with different frequencies of light.

The Israeli startup that developed the tech describes it as the “world’s first AI and spectroscopy-based device” to provide constant and non-invasive monitoring of urine output – an effective alternative to standard chemical or microscopic analysis.

The technology is already being used for elderly patients at assisted living facilities in Holland, where it gathers more and more data every time they use the toilet.

“We’re trying to catch diseases before you go to the doctor,” Guy Goldman, CEO of Olive Diagnostics, the company behind the product, tells NoCamels.

Olive embeds a miniature spectrometer – a device that detects and analyzes wavelengths of electromagnetic radiation – into a raised toilet seat.

The device, called the Olive KG, sends 64 light frequencies through the urine while it is in motion, passively detecting the molecules and using the data it collects to identify health concerns.

The sensor, which can be mounted on any toilet, has lights on one side and a photodiode on the other, which measures how much light is being transferred into it.

“Urine regulates the amount of minerals you should have in your body, making it a really good biomarker to detect a bunch of diseases,” says Goldman.

“People think urine is just waste, but it actually regulates the body. For example, if you have too much sodium, your body gets rid of it through your urine.”

The company is currently focused on providing accurate urinalysis – the medical term for urine analysis – for elderly patients, and particularly for their offspring who may worry that they are dehydrated or have contracted an infection.

Goldman was living in London and was concerned about his mother Karen, at her home in Jerusalem, who had been diagnosed with ovarian cancer and who eventually died of dehydration.

“She was sleeping 22 hours a day. We didn’t know that she wasn’t okay,” he says.

Goldman, a serial entrepreneur in data analytics, found there was no way to objectively monitor her condition and set about designing technology that could help. He used his late mother’s initials, KG, in the name of the product.

Accuracy in detecting certain molecules using traditional methods can be as low as 70 per cent, he says. By contrast, he claims Olive achieves complete accuracy because it is monitors every visit a patient makes to the bathroom, rather than the analysis of a single sample.

He says no other company uses optics to carry out urinalysis. Pregnancy sticks, for example, use reactive paper to measure the hCG hormone, which is produced after fertilization.

Goldman says optical urinalysis can also measure levels of cortisol, the body’s main stress hormone, and has potential applications in nutrition, mental health and beyond.

However, it can’t detect every condition, such as muscle disorders – only things that go through the kidneys.

The data collected from the the Olive KG is sent directly to the clinical departments of the assisted living facilities it currently operates in. It can connect with its new Apple Watch app Olive WatchOS, which brings AI-based urinalysis results to smart watches.

The company is also creating a new sensor that it will start selling directly to customers, complete with an app that gives user diagnostics, by the end of 2023.

Olive recently started selling its product to the US, where it’s being tested in a large assisted living facility, and is monitoring high-functioning people with mental disabilities on the East Coast. It has started its Round A Funding for $10 million.