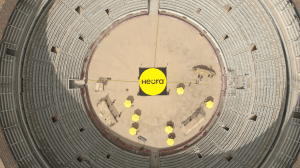 Plant-based meat startup Heura has debuted two new vegan pork products: sausage and chorizo. But the launch wasn’t a typical one; Heura introduced the meat-free items at a Spanish bullfighting ring in a bid to challenge the cruel tradition.

Heura introduced the products at La Monumental, which was the last active commercial bullfighting arena in Catalonia, Spain.

In 2010, the Parliament of Catalonia passed a law banning bullfighting events. The decision was made for ethical reasons, since the practice involves the public torture and killing of animals. Despite the fact that many countries have banned it, around 250,000 bulls are still killed in bullfights every year, according to Humane Society International.

Catalonia’s bullfighting ban came into effect in 2012. But four years later the highest court in Spain overturned it, claiming the ban was unconstitutional.

Still, no bullfights have taken place there since 2011. Instead, the colosseum – which seats around 25,000 people – has been used for concerts and sporting events.

Heura’s decision to launch its new vegan pork at the bullring was a way for the company to pay homage to its Mediterranean heritage, while also challenging the harmful traditions that have been a part of it.

“A cycle of injustice can be obliterated once people refuse to follow the status quo and start standing up for what they believe in,” Heura Co-founder and CEO Marc Coloma said in a statement.

“Society found a way to transform La Monumental from a place of barbaric animal abuse to an amazing platform for an evolved form of entertainment. As the tides shift and the plant-based protein movement continues to make animal-based meats more and more obsolete, Heura recognizes that the power sits with the people, and we ask the world to make their voices heard,” Coloma added.

The products (which are both gluten-free) are said to closely replicate animal meat while providing nutritional benefits.

As well as being rich in protein, fiber, and vitamin B12, the items have a lower fat content.

The products are kinder to the planet, too. One serving of Heura’s vegan sausages generates up to 77 percent fewer CO2 emissions than animal-derived sausages.