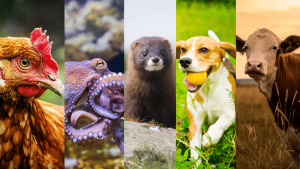 2021 has come to a close, and what a year it was. It’s easy to get caught up in all the catastrophe that the last 12 months brought with it (and boy, was there a lot). While it’s important to acknowledge and honor those hardships, it’s equally worthwhile to look back at all the progress we saw throughout the year. And importantly, use that knowledge to propel us even further in 2022.

Society is far from where it should be in a lot of ways – including its treatment (and exploitation) of animals. There’s no denying we have a long way to go. But here are just some of the ways humankind stood up for animals in 2021.

Animals used for entertainment and sport

Animals in the food system

Veganuary 2022 is expected to be the biggest yet, and it’s not too late to join in.

The post Here Are Over 40 Ways Society Stepped Up For Animal Rights In 2021 appeared first on Plant Based News.