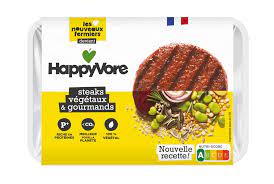 French startup HappyVore has raised €35 million to make sustainable, plant-based meat. The leading brand is putting the money to use straight away, and opening the biggest plant-based meat factory in France. Located in Chevilly, the production site used to be an industrial wasteland. HappyVore is enlarging and renovating the area to make its new factory. The brand bought the site last year, but the new funding round will help with refurbishments. Co-founder Guillaume Dubois said: “This acceleration is made possible thanks to our latest fundraising with new partners: Invus with the family group Artal.” They added: “Without forgetting our historical investors who trusted us at the beginning, notably Adrien de Schompré (Sushi Shop), Philippe Cantet, Rémi Douchet, Gregoire Kaufman.” HappyVore’s plant-based products include nuggets, steak, chipolatas, dumplings, mince, and strips. And thanks to its new facility, it will be able to manufacture more than 10,000 tonnes of its product lineup.

France is known for its meaty cuisine; virtually all of its traditional dishes contain animal products, from pot au feu to Croque monsieur. But things are changing. French vegan pork brand La Vie recently managed to convince Burger King to add its product to the menu. Now, the brand’s plant-based bacon is available in 430 Burger King restaurants across the country. La Vie wrote on Instagram: “One more small step for Burger King, a big leap for pigs, and a major step forward in our mission, to introduce plants to as many people as possible.” Earlier this year, Carrefour, which is one of France’s biggest supermarket chains, launched a vegan butcher counter. The counter featured products by Dutch brand The Vegetarian Butcher. HappyVore’s products are also available across the country, in Carrefour locations, independent grocery stores, and a number of restaurants, including Hawaii-inspired chain Poké Bar. The post HappyVore Raises €35 Million To Supply France With Plant-Based Meat appeared first on Plant Based News. meat pork butcher burger plant-based plant based investors funding startup