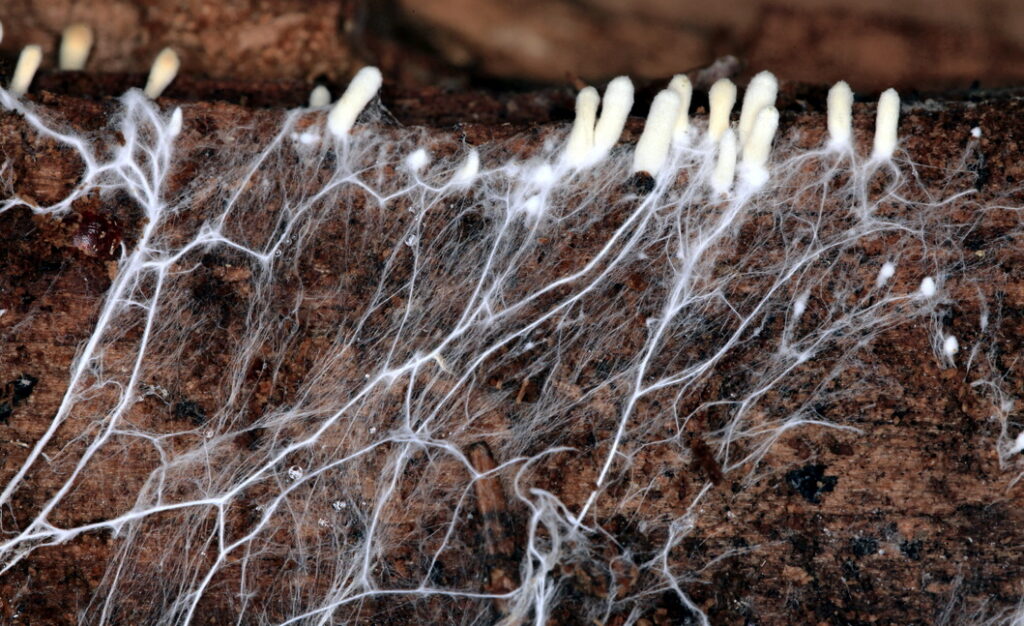 Startup says they taste great and are good for the planet

Mushrooms are like icebergs. They’re mostly hidden below the surface.

What we eat is just the “fruit” that appears above ground. At least 70 percent remains underground… and under-used.

But Kinoko, a startup in Israel, is cultivating the tangled network of thin fungal threads called mycelium into a high-protein food.

Kinoko has developed a patented method of using lentils and other legumes as the “substrate”, or nutrition source.

And instead of growing mushrooms as we know them, it grows filamentous fungi – a species that has no “fruiting body” and is 100 per cent mycelium.

In just four days the mycelium grows around the lentils to create a ready-to-eat burger, sausage, meatball, kebab or patty. There’s no further processing. What you grow is what you eat, with the lentils still clearly visible.

And it tastes great, according to CEO Jasmin Ravid. “It’s natural, has a clean taste, and is a combination between lentils and mushrooms,” she says. “You can still feel the lentils, but the texture is completely different.

“Vegetarians say it really tastes like meat to them, but most people say that it tastes like a delicious non-meat, plant-based option.”

Mushrooms are 90 per cent water and contain just three per cent protein. But Kinoko’s combination of mycelium and lentils is higher in protein than ground beef or tofu.

The company, named after the Japanese word for mushrooms, is based in Rehovot, central Israel. It has a production site that is already operating in Ashdod, in the south of the country.

And it aims to produce a tonne of Kinoko every month, with just two staff members running the factory.

Most of the world’s population relies on animals for protein. But that’s not sustainable, says Ravid.

“At the rate the world’s population is growing, if we want to carry on eating animals as our main protein source, we’ll need two and half planets by 2050.

“That’s in order to have enough land and enough water, aside from the CO2 emissions, which is probably going to destroy the climate by that point.

“We’ve been so focused on eating animals and eating plants that we’ve never looked into the mushroom kingdom.

“It has millions of different strains of organisms and they have an amazing ability to create what we are looking for in our nutrition.”

Mushrooms are more like animals than plants in the way they break down carbohydrates into high quality protein, she says.

“If you look at the tree of life, mushrooms are genetically closer to animals at the DNA level. If you eat a portobello mushroom steak it doesn’t have a plant texture. It’s kind of a bouncy, juicy texture. And the flavor is much more umami. It has a different flavor than plant ingredients.

“And the mycelium actually grows in the same structure as tissue in animals’ bodies, and the texture resembles meat.”

There’s a global rush to develop alternative proteins – cultivated meat and fish, for example – to a point where they can be produced on an industrial scale at the same price as the “real” thing.

But Ravid says Kinoko’s technology is simple, tested and proven. And unlike most other products, it’s not attempting to mimic meat.

“Dr. Daria Feldman, our CTO, has been working in this field for 12 years and has won every award possible. She’s a brilliant scientist working with fungi fermentation, first on green energy and biofuels and then switching to food production. She came up with our solution.

“She really understands how to make highly nutritious products in a short period of time, and how to make fermentation really affordable and really scalable.”

Kinoko is produced using an “overlooked” process called solid state fermentation. Most of us associate fermentation with beer, when yeast turns sugar to alcohol, but the term also covers baking bread or making Camembert cheese, when yeast cultures are mixed with curdled milk.

“I can almost count on one hand the companies that are doing solid state fermentation, which is what we are doing on a commercial level,” says Ravid.

“A lot of companies are doing liquid state fermentation, which is like beer brewing, growing the microorganism in a big water tanks. And almost no one is doing solid state. So it was kind of overlooked.

“Also, most companies are focusing on trying to mimic texture and taste of specific kinds of animal products, like shrimp or cream, or chicken filet.

“Right from the beginning we wanted something that was an alternative to eating animals but it didn’t have to be a replica.

“We don’t need to convince people that they are eating beef or chicken or shrimps. We just need to have convenient, affordable, tasty, and nutritious products.”

Kinoko grows at room temperature into the shape of whatever mold it’s put into. They just add a few milliliters of fungi mycelium to each kilo of lentils. After four days the mycelium has grown and woven itself around the lentils, and is ready to be eaten, frozen, or refrigerated.

It sounds simple, but fungi can be hard to please. “They are a bit of a delicate organism. So the main challenge is to keep the fungi happy,” says Ravid.

“We like to think about our process as more like agriculture than food production. We are growing the main dish. Just take the finished product with some olive oil and some salt, put it in the oven, and that’s it.

“It’s not just another highly processed food ingredient like many of the plant-based solutions out there.”

The company aims to scale up Kinoko production, at an affordable price. “If we want to get a lot of the human population to move from animal food to our fungi-based food, it has to be affordable, and not a premium product,” says Ravid.