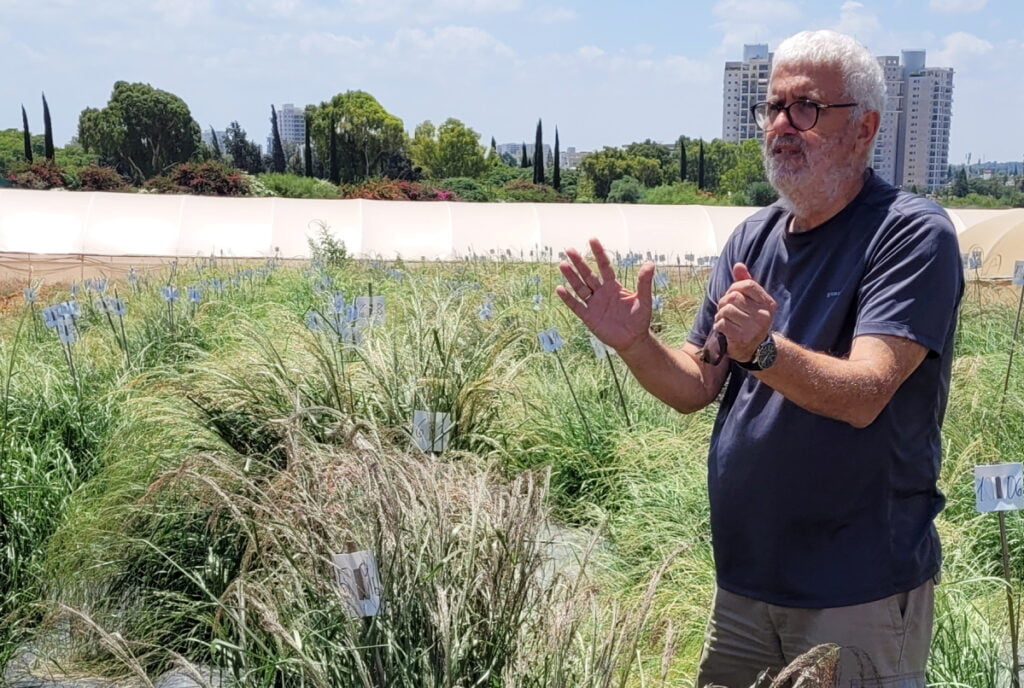 Researchers are bringing teff – the staple food for millions of Ethiopians – to Israel.

It’s best known as the main ingredient of injera, the sour, Ethiopian flatbread, and it’s now being described as a new superfood, a quinoa for the 2020s.

It is gluten-free, rich in amino acids, protein, fiber and minerals. And it can grow in harsh conditions, and drought-prone climates.

Bringing a crop from the Horn of Africa to the Mediterranean sounds simple enough, to those outside the world of agriculture.

But as Prof Shuki (Yehoshua) Saranga, from the Hebrew University of Jerusalem tells NoCamels, it’s a huge challenge to identify the one breed out of many hundreds that is best suited for modern, mechanized cultivation.

The problem is that 95 per cent of the world’s teff is grown in Ethiopia, and very little of it is available for export.

The government actually banned all foreign sales of teff between 2006 and 2015 to make sure there was enough for its own population and even now exports are at a very low level.

Prof Saranga and his team are working hard to develop teff as a commercial crop in Israel, to provide consumers with a gluten-free alternative, and to supply the 160,000-strong Ethiopian community with a steady and fair-priced supply of their traditional staple.

But it’s not simply a case of planting teff seeds in a field in Israel and hoping for the best. Teff is what’s called an “orphan crop” – which means it isn’t traded internationally and therefore hasn’t benefitted from the vast research and development that has gone into maximizing yields for wheat, maize, rice, barley and oats, for example.

Teff, with its narrow leaves and tiny seeds, is sown, grown and harvested by hand in Ethiopia.

Prof Sranaga has, over the last seven years, been testing hundreds of varieties of seed to see which of them will thrive as a “modern” crop, with irrigation, fertilizers, mechanized harvesting, and oter advanced technologies.

“Teff is primarily cultivated and harvested manually in Ethiopia, from sowing to harvest to threshing and it’s not suitable for modern agriculture,” Prof Saranga tells NoCamels.

“And what we are trying to do is actually develop it into a modern crop that would be more suitable to Israeli agriculture as well as to other Western countries.”

The Ethiopian government wouldn’t provide a single teff seed for his research, so Prof Saranga had to resort to using seeds that had been collected there as far back as the 1920s and deep-frozen in gene banks.

“We have already achieved our short-term goal, to screen 400 breeds of teff that we obtained from international resources, because the Ethiopians do not allow a single seed out of the country,” he said.

After screened so many varieties the lab, they are now planting and assessing.

“This season, we have teff fields growing in Israel with our seeds from the Golan Heights down to Yotvata (kibbutz in the southern Negev). So it can grow all throughout Israel.”

So far the farmers involved in teff trials are growing it as forage – animal food – and the cows are loving it.

Within the next five years teff could be a commercially viable gluten-free crop for the human population in Israel, and beyond. Prof Sranaga hopes that teff cultivated in Israel will be sold at an affordable price.

“Many flour replacements like a pure starch, but teff contains fibers, vitamins, minerals, it’s it makes much nicer texture, much closer to bread, and much tastier than you could make with conventional gluten free materials.

One of the biggest problems is that the plants tend to flop – or “lodge” – rather than grow upright. That doesn’t bother farmers in Ethiopia too much, because they harvest by hand. But it makes it impossible to use a combine harvester.

“It takes a long time to develop such a new product from entirely different environment. You have to do it step by step,” says Prof Saranga.

“Our aim is, first of all to adapt, or to facilitate the development and the development of teff as a new crop in Israel, to acclimatize to adaptive to a cultivation in Israel, which will be a kind of a win-win situation, the farmers will win a new crop that they can make a profit from and they can diversify their crop rotation.”

At the moment teff is being grown on a trial basis on 3,000 to 5000 dunams of land (300 to 500 hectares) in Israel. Scaling that figure up by around 10 times would be enough to meet current demand.

“Some teff is grown in Holland, some in Germany, some in Australia, in the United States, primarily for animal feed. Some in Kenya, some in South Africa.

“But we’re unique in this respect – we’re growing teff under Mediterranean conditions and we are irrigating it, which they are not doing elsewhere, which brings a whole new set of challenges.”

Prof Saranga’s research has primarily been funded by Israel’s Ministry of Agriculture, and more recently by the Israel Innovation Authority. He’s had 15 students involved in the project, over its seven years so far and has collaborated with researchers specializing in, for example, weed control and fertilizer application.

Food manufacturers in Israel are expressing interest in home-grown teff, and Prof Saranga also says he is keen to see Ethiopia benefit from his research – despite refusing him any help.

“We are in contact with researchers from Ethiopia and we will happily share the knowledge and the breeds that we develop with them. I have here, one doctorate student from Ethiopia, who will go back to his country and use the knowledge that he gained here for the benefit of his people.”

The post Gluten-Free Superfood From Ethiopia Is Coming to Israel appeared first on NoCamels.