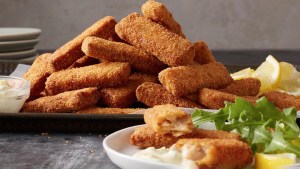 This article was originally published by Plant Based News.

Chad Sarno is the Co-Founder and Chief Culinary Officer at Gathered Foods. In a statement sent to PBN, he said: “These products are game-changers for the industry. “Consumers have become more aware of the environmental impact of eating seafood and we’re proud to be a delicious, culinary-driven solution. “We’re pushing culinary boundaries every day to deliver the taste and texture consumers expect from seafood.” Sarno then concluded: “This product line has surpassed our expectations and we’re incredibly proud.” Moreover, Christine Mei is the CEO of Gathered Foods. She added: “This nascent industry, which is ready to surge, presents an immense opportunity for our brand “As we continue to grow, our focus remains on creating craveable plant-based seafood alternatives that deliver on taste, texture, and comparable protein. “With our new breaded line, we took fan-favorite seafood products consumers know and love, and transformed them into great-tasting ocean-friendly alternatives.”

Good Catch’s expansion shortly follows the Netflix debut of Seaspiracy. The documentary sheds light on the ‘war being waged’ on the world’s oceans – delving into the fishing industry’s environmental impacts on marine life. It garnered global media attention and received support from a slew of celebs such as Bryan Adams and Kourtney Kardashian. As a result, attitudes towards seafood and fishing have started to change. Even Vogue admitted the film will ‘change your thoughts on seafood forever’… Despite long promoting fish as a nutritious and ‘sustainable food’ The post ‘Game-Changing’ Vegan Seafood Products Launch As Seaspiracy Sparks Environmental Concerns appeared first on Plant Based News. plant-based plant based good catch gathered foods gathered fish seafood protein