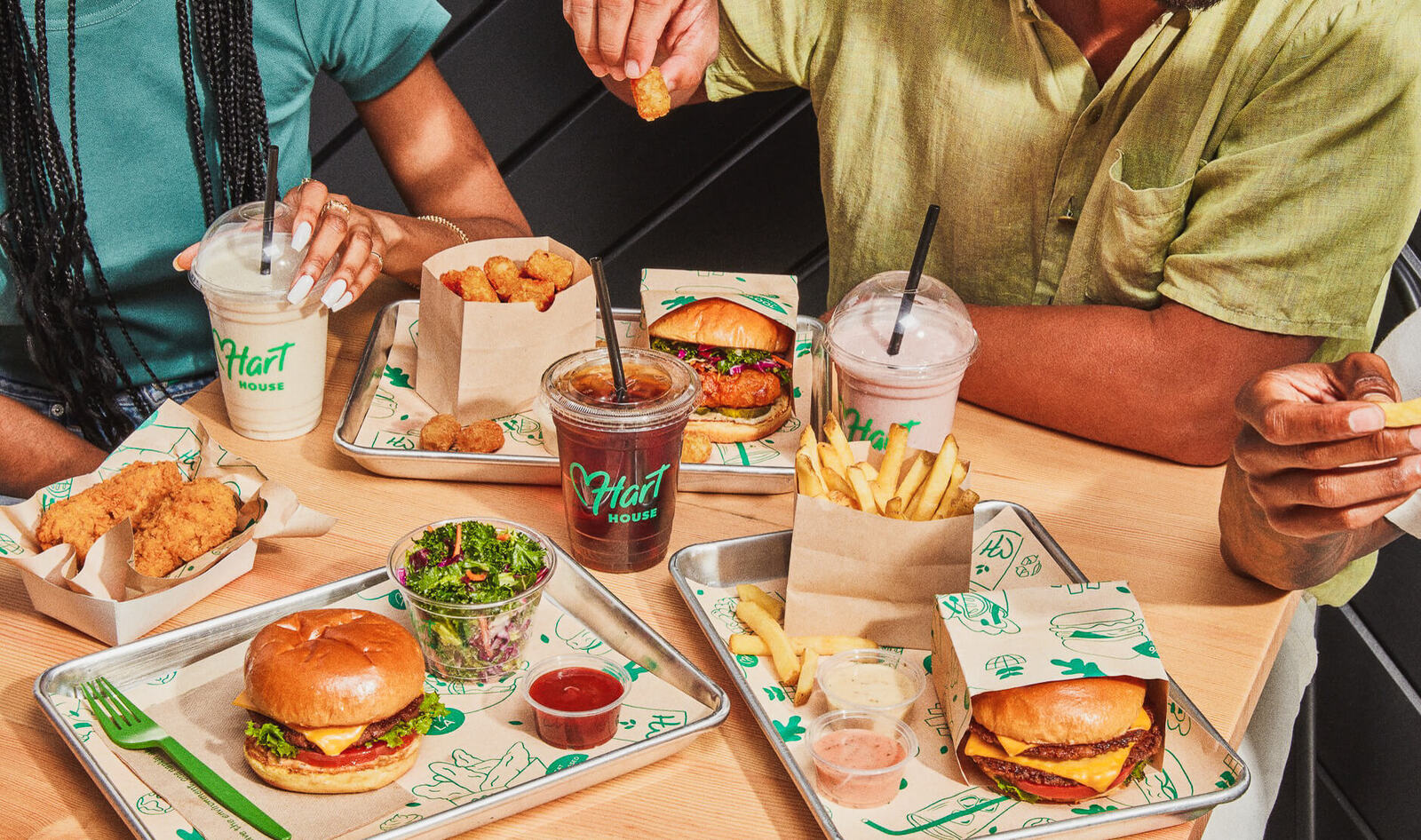 Los Angeles has long established itself as one of the most prominent and diversified vegan cities in the US, if not the world. During the height of the pandemic, when many restaurants shuttered, the vegan scene in LA endured. With new restaurants cropping up on the regular, LA is a boomtown for the vegan culinary scene. Yes, opening a food concept is still a risky business, and the notion of “if you build it, they will come” doesn’t apply when there’s money on the line, but LA residents have proven their appetite for plant-based cuisine. From email-to-order pop-ups to classic California burger-and-fry concepts, here are 10 new vegan-friendly restaurants open in Los Angeles.

Another vegan burger joint? Technically, yes, but Herbie Burger sets itself apart from the seemingly endless options that rely on doctoring up an Impossible or Beyond burger. Herbie’s burgers, tenders, and wings are made in-house using real food ingredients like beans, mushrooms, and tofu. Each menu item provides that savory element you crave without weighing you down later. The menu is fairly extensive between the burgers, oyster mushroom wings, chick’n sandwiches, and fresh and fried sides, but here’s what we recommend: the Herbie Burger, Buffalo Tofu Chick’n Tenders, and Charred Broccoli. Honorable mention: anything with the housemade cheese sauce, from the loaded nachos to the macaroni and cheese.
Find out more

Vegan butchers are firmly “a thing.” These brands that specialize in plant-based meats tend to carry a wide range of sausages, deli meats, and holiday-time roasts, but Maciel’s leans more toward a carniceria. Yes, the pastrami is great here, but the Mexican adobo ribs, chorizo, and chicharonnes make Maciel’s stand out. Along with a menu of vegan meats, the business also sells Mexican-style cheeses, Mexican Chocolate Mousse, agua frescas, housemade salsas, and operates a deli with a variety of meaty sandwiches on offer. For those who enjoy some heat, the Sloppy Pepe sandwich is unparalleled.
Find out more

The adoptogenic Erewhon elixir bar in Venice has new competition. This wellness retreat on Abbot Kinney just launched a food-and-beverage concept it’s calling California Izakaya. The wood-and-palm outdoor space offers a solid list of Japanese sake, beer, and whiskey along with plant-based small bites, adaptogenic lattes, and a traditional tea ceremony. Sip on a Matcha Mojito while waiting for your vegan cheese plate and Edamame Raita Dip, or try something sweet such as the gluten-free Sugarbird Scone Trio. Secluded from the bustle of Abbot Kinney by thick hedge and fronds, California Izakaya is the perfect place to unwind after a cold plunge, deep tissue massage, or acupuncture treatment at Den Mother.
Find out more

Rochelle Tyler has been baking her enormous, crispy-on-the-outside, chewy-on-the-inside cookies since 2019, but very few have known about it. Tyler secured a cottage food license to make her extremely small-batch cookies at home, but now that she’s expanding into multiple The Pie Hole locations, she’s going to need a bigger mixer. Those in the know could find her sweets at The Pie Hole Arts District location, but this month, the shop’s Pasadena and Hollywood store fronts will also offer Tyler’s creations seven days a week. Flavors rotate, but the hits include Strawberry + Cream, Banana Pudding, Chocolate Chip, and Snickerdoodle. The full menu of options can be found on her website, and she accepts email orders. Show up to your next party with a dozen of these cookies, and you’ll forever be known as the guest who brought those cookies!
Find out more

Thanks to the celebrity endorsement, Hart House is one of the most buzzed about vegan restaurant openings in a while. The soon-to-be chain (two other locations are already in the works in LA) offers familiar and accessible fast-food items using vegan ingredients. Burgers, chick’n sandwiches, and nuggets make up the bulk of the menu, along with a long list of dipping sauces. Shakes, fries, tots, and two salads are also on offer. Not far from LAX, it’s a convenient stop after getting off a long flight.
Find out more

The first chapter of this Echo Park business opened mid-August, serving up vegan-friendly savory dishes with distinctive Levantine roots. On September 13, the bakery side of the brand opened its doors. Both menus are dedicated soy- and gluten-free, with many plant-based options to choose from. For a snack, the mezze menu of hummus, spicy labneh, and whole roasted carrots will surely satisfy. For something heartier, try the vegan za’tar manoush (flatbread) or the farinata plate. The bakery selection changes often, but like the bistro menu, vegan options are clearly labeled.
Find out more

Seabirds is one of the few vegan restaurants that lures Angelenos down to Orange County. The airy, everything-made-from-scratch bistro has grown slowly but with intention. From its flagship in Costa Mesa, it’s expanded north to Long Beach and now, Los Feliz. Each location features slight variation in the menu, but you can always expect something familiar with a delightuflly unexpected twist. Come with a crowd and try the Purple Taquitos with purple potatoes, housemade chipotle sour cream, fermented curdito, almond feta, and cilantro. Then, tuck into a Beer Battered Avo Taco or Kimchi Taco. Finally, convert all the jackfruit haters by splitting the Jackruit Nachos. Don’t skip dessert here. If dining alone, the poptarts are beyond any poptart you’ve experienced. The crust is tender–not dry–and the filling is plentiful. If you’re with a group, the iconic Chaffle is a must. In true Seabird’s fusion spirit, the kitchen doctors up a thick and fluffy Belgian waffle by coating it in cinnamon sugar (like a churro) then topping it with heaps of vanilla ice cream, walnuts, and hot fudge.
Find out more

Friday, September 16 marked the sixth opening of this popular LA burger joint. Colloquially known as the vegan In-N-Out, Monty’s is now firmly established on the West Side in Culver City, just shy of the Santa Monica city border. Hospitality icon Nic Adler of Nic’s on Beverly and culinary director of Coachella is behind this growing fast-casual chain. Like its omnivorous predecessor, In-N-Out, the menu is streamlined to include just the hits: single or double patty burgers, milkshakes, fries and tots, and a kale Caesar salad. Check the brand’s Instagram for limited-time specials such as an After Hours white chocolate cherry shake or chick’n tenders made by Daring.
Find out more

Chica’s gets an honorable mention here for its expansion into Orange County. The vegan-friendly mico-chain currently has three locations in LA and now, it’s sharing its glorious vegan Crispy Tacos with the fine folks of Orange County. Chica’s will open an Irvine and Huntington Beach location in quick succession—both will be up and running by mid-October, with a third on the way. The menu offers plenty of plant-based options from vegan queso burritos to jackfruit-topped bean and rice bowls, but the restaurant’s claim to fame are the Crispy Tacos. Filled with Abbot’s Butcher Ground “Beef” and garnished with iceberg lettuce, radish, and citrus vinaigrette on a pan-fried corn tortilla, these tiny tacos are the perfect bite.
Find out more