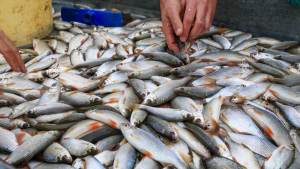 The world’s second biggest fishing vessel, the Dutch-owned trawler FV Margiris, has spilled 100,000 dead fish into the Atlantic Ocean off the coast of France.

Images of the fish spill and the Margiris vessel, captured 180km off the French coast, caught the attention of France’s maritime minister, Annick Girardin.

In a Tweet, Girardin named the images “shocking” and stated that the practice does not reflect France’s commitment to “sustainable fishing.”

She has since called for an investigation into the incident.

The trawler’s net spans 600 meters by 200 meters when fully deployed. This is large enough to park several planes alongside one another, without their wings touching.

This practice of bottom trawling is highly criticized by environmentalists, due to its ties to habitat destruction and biodiversity loss.

The Margiris trawler was forced to leave Australian waters in 2012, over concerns about its effect on local fish stocks. This resulted in a ban on its operations.

The vessel acts like a giant fish factory. It catches the fish and processes them onboard, rather than offloading its catch at a port.

The spill of blue whiting, the animal often used to produce fish fingers, was said to be caused by a rupture in the trawler’s net.

“Such an accident is a rare occurrence, and in this case was caused by the unexpectedly large size of the fish caught,” said Pelagic Freezer-Trawler Association, which represents the trawler.

Sea Shepherd suspects otherwise, and has questioned whether the animals were intentionally dumped for other purposes.

On Instagram, Winters spoke about issues within the fishing industry beyond environmental concerns.

He said: “What is being ignored is the fact that each of these 100,000 blue whiting was a sentient individual who suffered as a consequence of being needlessly ensnared in a net and killed.”

According to PETA, the fishing industry is the biggest killer of animals in the world. It’s estimated that more than one trillion fish die at the hands of humans each year.

The post French Minister Calls For Investigation Into Fishing Vessel That Dumped 100,000 Dead Fish appeared first on Plant Based News.