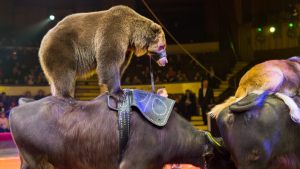 The French parliament has voted in favor of updated animal welfare legislation. The new law will help protect captive wild animals used in circuses and other performances, as well as minks on fur farms.

The legislation, which has been in debate since last year, received cross-party support in both houses of parliament. It now requires the signature of President Emmanuel Macron, who called the move a “historic step” for animal rights.

Wild animals in the circus

By 2024, the use of wild animals in circus shows – including elephants, bears, lions, and tigers – will be prohibited. The impact is likely to be far-reaching, given that there are 120 circus owners in France, according to The Guardian.

Honorary president of the World Circus Federation Princess Stéphanie of Monaco shunned the decision. “In the circus, we make people happy, we’re not hurting anyone, but we get picked on. Whereas hunting with hounds, for example, is cruel to deer, horses and dogs,” she commented.

But animal rights groups insist that captive animals suffer in the entertainment industry. According to PETA, circus animals don’t perform tricks “because they want to,” but because “they’re afraid of what will happen if they don’t.”

Circuses keep animals “imprisoned in cramped, filthy cages, in which they eat, drink, sleep, defecate, and urinate—all in the same place,” PETA says. The charity adds that animals are also subject to whippings, beatings, electric shocks, and weather extremes that don’t suit their species.

Using wild animals in television shows, nightclubs, and private parties will also be prohibited under France’s new animal welfare law. And in seven years, owning wild animals at all will be illegal.

Additionally, lawmakers will place limitations on the sale of pets; those seeking to purchase one must wait a week. This is intended to halt impulsive purchases, which raise the risk of animal mistreatment and abandonment.

The announcement has won approval from Barbara Pompili, the French Ecology Minister. Pompili said in a statement: “To act in support of animal well-being is the mark of a conscious society and of its responsibility towards a fragile natural world. It is a sign of mature civilization.”

But some argue that there is still more work to be done. For instance, the new legislation does not protect the birds used to produce foie gras, or the livestock raised for meat and dairy.

Veterinarian Loïc Dombreval is the LREM co-sponsor of the law. “There will inevitably come a day when … we will debate sensitive issues such as hunting, such as bullfighting, or some animal-rearing practices,” Dombreval told The Guardian.