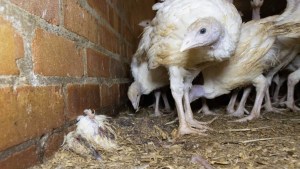 A turkey farm in Lincolnshire, UK, is the latest supplier to major supermarkets to have been called out for its shocking treatment of animals living on it, covert footage has uncovered.

It comes as the UK is observing its “largest-ever” outbreak of bird flu, which can occur when birds are crammed in tight sheds. This provides what Viva! brands the “perfect petri dish for disease.”

This October, Viva! investigators obtained footage from a barn owned by Hook 2 Sisters, which supplies the likes of Sainsbury’s, Tesco, and Marks & Spencer.

Across several images, injured birds were shown living amongst dead carcasses. Moreover, one turkey was seen bleeding from the head.

Despite these findings, Hook 2 Sisters maintains it ensures the “highest level” of animal welfare. Additionally, meat produced from its premises is Red Tractor assured.

According to The Independent, inspectors with Red Tractor made a visit to the farm this week and covered no welfare problems.

“Animal agriculture is abhorrent for animals, whatever the system. But factory farms like these also pose significant threats to human health and the climate catastrophe,” said head of investigations, Lex Rigby.

The turkeys on Hook 2 Sisters are treated as “nothing more than Christmas commodities,” Rigby added.

“I was appalled to see dead birds left rotting on the farm floor, which not only presents an obvious risk to hygiene.

“But, also poses a potential disease risk to the whole flock, particularly now with Avian Flu cases worryingly on the rise.

“It’s hard to imagine that any sufficient, adequate, and important health and welfare checks were routinely carried out on this particular turkey farm,” Abraham added.