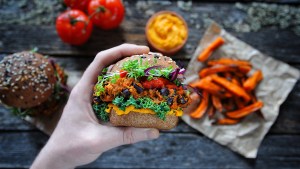 One of the UK’s largest foodservice companies is slashing its meat production to up its plant-based offerings.

Compass Group aims to switch 40 percent of its meat options to plant-based alternatives in the next decade.

‘The future of foodservice’

The move is part of the firm’s plans to slash emissions by 55 percent by 2025 and at least 65 percent by 2030. It also aims to run from 100 percent renewable power next year and has pledged to shift to a fully battery-car fleet by 2024. Robin Mills is the Managing Director of Compass Group UK and Ireland. According to Business Green, he said: “We believe it is our responsibility to contribute towards a future of sustainable food production… And a commitment to climate net-zero is an important milestone. “Critical to the delivery of our targets will be the partnerships with our clients, suppliers, employees, civil society partners, and government. I couldn’t be more excited for the future of foodservice.”

Compass Group has also announced it is joining the UN’s Race To Zero initiative. The campaign aims to ‘build momentum around the shift to a decarbonized economy ahead of COP26. This is where governments must strengthen their contributions to the Paris Agreement. Currently, countries under the Paris Agreement are obliged to limit global warming to ideally 1.5 degrees Celsius. Food expert Bruce Friedrich says this is ‘impossible’ unless meat production is reduced. In a statement sent to PBN, he said: “Every year going forward has a lot riding on it in terms of the world’s ability to shift to more efficient, climate-friendly ways of making meat. “To succeed, governments need to fund open-access R&D. We know [this] will not only spur innovation and new markets, but also reap massive public benefits — from cleaner air, water, and soil to a more secure and sustainable global food system. This needs to happen. And fast.” The post Foodservice Giant To Switch 40% Of Meat Offerings To Plant-Based Alternatives By 2030 appeared first on Plant Based News. plant-based plant based celsius meat fund