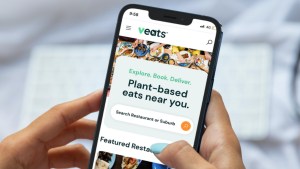 VEats is the brainchild of vegan entrepreneurs Lara Young and Susan McCarthy. The pair came together with the view of making cruelty-free living more accessible. Or in their words, “changing the world, one plant-based meal at a time.”

Via the online platform, users can peruse local businesses offering at least three vegan options. They can choose to book a table or order pick-up or delivery.

Young and McCarthy say the concept is the first of its kind.

VEats began its pilot run in Sydney this month. The website currently boasts more than 600 directory listings across the city. By the end of January, it’s expected to have more than 50 listings that allow for bookings and deliveries.

Together, the companies will take on vegan and vegetarian markets in Melbourne, Perth, and Queensland in Australia.

From there, VEats will cross the pond to expand throughout the UK. First up: Brighton and London.

“Australia is one of the fastest growing vegan markets in the world and Sydney is the perfect city to launch, with vegan hubs like Newtown leading the way,” Young said in a statement sent to Plant Based News.

“Whether you’re a vegan, flexitarian, pescatarian or never had a plant-based meal in your life, we want to help create an even greater shift towards plant-based eating.”

A simpler transition away from animal products

Young was motivated to launch VEats after spotting a gap in the market for those looking to order plant-based food from restaurants and other services.

After growing up on a meat-based diet, Young found that going vegan meant learning about “a whole new way of eating.”

“The journey wasn’t easy and I spent hours and days researching restaurants, checking menus, calling ahead to get them to accommodate me, and trying to veganize food through other delivery platforms,” she explained.

“I knew that if it was hard for me, it would be hard for anyone trying to make the transition to plant-based eating. That’s when I had the idea for VEats,” the entrepreneur added.

The new service has already earned praise from Aussies. Vegan DJ and producer Tigerlily commented: “It’s going to be so game-changing to have a platform that I trust and know is totally vegan-friendly.

“This is a massive development and so many people are going to benefit from it. I know I’m going to use it all the time.”