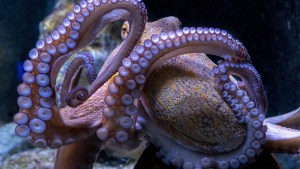 The world’s first octopus farm is set to sell aquaculture-born animals in 2023, with the capacity to produce 3,000 tonnes of octopus meat a year.

Spanish firm Nueva Pescanova Group has planned the site for some time, though it has remained tight-lipped on what the farm will look like.

Animal rights campaigners aren’t the only ones kicking back, with many researchers warning that it is not ethical.

Is it too late to stop it?

After decades of research, Nueva Pescanova has bred 50 octopuses in aquaculture and is planning to ramp up production over the coming year.

The firm will reportedly invest more than €50 million on the Canary Islands site. And, is likely to funnel octopus meat across international markets to meet demand in Australia, China, Italy, and beyond.

Here, other companies are experimenting with their own octopus farms – Japan’s Nissui being one example.

It comes following hurdles over the incubating, hatching, and raising of octopuses at such scale in captivity. Yet, as aquaculture proponents The Fish Site explains, farming octopuses has been “appealing” to many companies in the sector for some time.

In an extensive recent feature, the BBC questioned whether the farm installation should go ahead.

It comes with the growing domestication of marine life in aquaculture, dubbed a factory farming system of the sea.

Now, more than 550 different species are raised in captivity across almost 200 countries around the globe.

While Nueva Pescanova assures it is “committed” to reducing pressure on wild octopus fishing, experts argue it won’t halt fishers from hunting them.

The animals are often described as “complex” in biological communities and deemed highly intelligent.

In a research paper titled The Case Against Octopus Farming, a group of professors outline the animals’ “exceptional abilities,” from sophisticated nervous systems to incredible memory.

This is concerning as there is “little known” about how to ensure welfare in aquaculture, the authors warn. But it is known that if octopuses are kept too closely together they are likely to cannibalize one another.

And, “intensive farming systems are likely to be associated with high mortality rates and increased aggression,” they add.