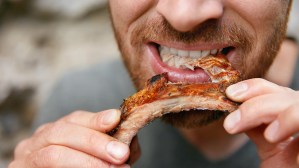 Eating meat could cause a world-changing pandemic ‘that makes COVID-19 look like a dress rehearsal’, scientists warn.

The group of researchers who made the statement are from the University of the Free State in South Africa. They say the human demand for affordable meat on a regular basis creates ‘the perfect breeding ground for more diseases.

‘There will be more pandemics’

Professor Robert Bragg is a researcher in the Department of Microbial, Biochemical, and Food Biotechnology.

In a statement sent to PBN, he said: “There will be more pandemics, and there is a feeling among some scientists that this could just be a dress rehearsal for the real big pandemic.

“Many virologists, including me, have been predicting an influenza pandemic for many years. Mankind has been warned about the coming pandemics for many years. But, people seem to want to listen only when they are in the midst of a pandemic.”

“The bird-flu virus, Influenza H5N1, has a mortality rate of around 60-65 percent, but it has not yet developed human-to-human transmission. “

Bragg then added: “If this virus does develop human-to-human transmission, we could be in for a really serious pandemic!”

“Remember mad cow disease? Have you seen chicken batteries? We should not blame ‘exotic’ eating practices, but look at our own.

“If we could see eating meat as a ‘treat’ and not a daily ‘right’, we can reduce pressure on the environment and reduce the speed at which another zoonotic virus can evolve.”

Bragg also points out that there are many examples of ‘serious’ human pandemics that have spread from animals to humans.

“Another good example is the Ebola virus, which has also been traced to people eating bats in Africa,” he explains.

“Yet another example is HIV, which is believed to have spread to man as a result of the consumption of chimpanzee meat.

“The most serious has been the 1918 Spanish flu, which started off in pigs and spread to man. All of these have to do with the mistreatment of animals by man.”