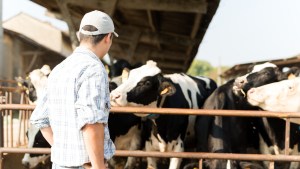 Farmers in the Netherlands are facing calls to cut livestock production by almost a third. The proposal is in response to the ongoing ‘nitrogen crisis’ that the country faces, including concerns about ammonia pollution.

Nitrogen is the most abundant element in our atmosphere – making up around 78 percent of the atmosphere, according to NASA. It’s essential for life, but too much can damage the ecosystem.

Excess nitrogen can leach into underground water sources or enter oceans via agricultural runoff. This can lead to algae blooms, which deplete oxygen in the water and can create aquatic dead zones. Dead zones typically cannot support life of any kind.

Ammonia is made of nitrogen and hydrogen. In high concentrations, ammonia can cause respiratory problems, dermatitis, eye irritation and in severe cases, blindness or death.

What is the nitrogen crisis?

In 2019, the Council of State – the highest Dutch administrative court – ruled that the government was breaching EU law, stating that the country’s efforts to reduce excess nitrogen in vulnerable natural areas were insufficient.

Up to 18,000 infrastructure and construction projects were halted in an attempt to lower emissions. The government also reduced daytime speed limits to 100km per hour (62mi) on motorways.

But according to the National Institute for Public Health and the Environment, animal husbandry and manure applications are the chief culprits of nitrogen oxide and ammonia pollution.

This is significant given the number of land animals being raised for food in the country. The Netherlands has more than 100 million chickens, 12 million pigs, four million cows, and 600,000 goats, according to DutchNews. It’s also the EU’s largest meat exporter.

The finance and agriculture ministry has published two proposals to cut livestock numbers by 30 percent. According to The Guardian, it’s one of the ‘most radical plans of its kind in Europe’.

Both proposals use buy-back schemes to reduce animal numbers – including dairy cows, pigs, and poultry. One proposal also subsidizes sustainable land management and livestock housing, while the other focuses on price incentives, such as a levy on ammonia emissions.

“We are a relatively small country with a lot of inhabitants, industry, transport and agriculture, so we are reaching the limits of what nature can take,” Rudi Buis, a spokesperson for the agriculture ministry, told The Guardian. “There is a high level of urgency for us to tackle the nitrogen compounds problem. This means that in the near future, choices must be made.”

The proposals have attracted criticism from members of the farming community. The Farmer’s Defence Force (FDF), which has nearly 60,000 members in its Facebook group, was established to help farmers who are under ‘attack of environmental extremists’.

On its website, FDF calls the nitrogen reduction plans ‘disgusting’. In July, FDF and fellow farming group Agractie staged protests in multiple regions in the Netherlands.

Some of the demonstrations saw farmers filling the roads with hundreds of tractors.

“The snow is not blackened by farming activities, the air is not poisoned with heavy metals by farming activities. You will not find increased cancer rates around farms,” FDF writes on its website. “The air was clean during the lock-downs – when the farmer plowed on and industry and air traffic came to a virtual standstill.”

The groups are planning further protests in the coming weeks.

‘Step in the right direction’

Meanwhile, other groups have pushed for more to be done to protect the planet.

Coalition party D66 previously proposed reducing the number of livestock in the Netherlands by 50 percent.

D66 parliamentarian Tjeerd de Groot spoke to RTL Nieuws about the issue in 2019.

“[Seventy] percent of Dutch nitrogen emissions come from agriculture, a large part of which comes from intensive livestock farming. That is huge,” de Groot said, per the NL Times.

“At the same time, the contribution of intensive livestock farming to our own economy is not even one percent. The ratio is completely missing.”

“It’s a step in the right direction,” van Liere said to The Guardian. “We would do more on buying out farmers and helping them transition to sustainable agriculture.”

The post Dutch Farmers Face Calls To Reduce Livestock By 30% To Help Protect The Planet appeared first on Plant Based News.