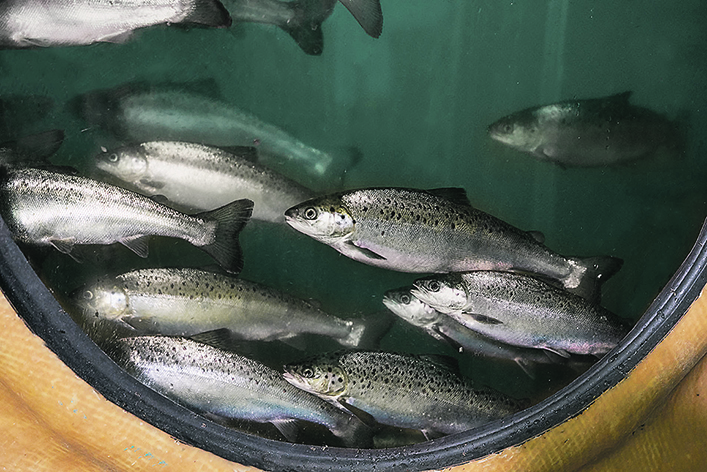 As the world population grows in number and affluence, the demand for high-quality protein is putting unsustainable pressure on wild fish stocks but also creating opportunities for aquaculture alongside dryland farming.

“The market for salmon is large, global and growing,” said Sylvia Wulf, chief executive officer of AquaBounty Technologies. “Current methods of farming can’t keep up. We all know that even traditional net-pen farming has its challenges. They can’t control the weather; they can’t control the climate.”

AquaBounty raises Atlantic salmon genetically modified to grow faster than wild salmon, allowing them to come to market weight in half the time and hence with fewer inputs. The company sold its first commercial-scale harvest out of its Indiana facility in May 2021, while the first fish came onto the Canadian market from its Prince Edward Island facility in November 2021.

The company uses a recirculating aquaculture system (RAS). Fish are raised in large tanks with water pumps providing a constant current. Water is constantly removed, treated, aerated and returned to the tanks. Wulf said their systems recycle 95 to 97 percent of their water and what little that is released goes out as good or better than the original source.

“We believe that land-based RAS farms have to play a critical role in the future and we think that’s going to be true of a number of species, salmon just being one of them,” Wulf said.

Since RAS systems are self-contained, they can be located anywhere they make the most sense for market access or other reasons.

“For example, the farm in Indiana and the farm in Ohio are accessible within 24 hours to 80 percent of the population in the U.S.,” Wulf said. “The reason for that is really to minimize our carbon footprint. The challenge right now is that we’re air freighting imports. Any time you’re minimizing transportation, you’re minimizing the carbon footprint.”

While aquaculture does need a supply of good quality water, it’s far less than other livestock, said John Derksen. This means fish farming is perfectly viable on the dry, windy grasslands of southern Alberta.

“One of the biggest tilapia producers in the West is actually 45 minutes from here in Fort Macleod and he supplies the live food market in Vancouver,” said Derksen, chair of the Aquaculture Centre for Excellence at Lethbridge College in Alberta.

“Ten years ago, he was a pig farmer. And he still has pigs in a barn, but one barn he totally converted over to fish.”

Semi-arid and with few lakes, southern Alberta might seem an unlikely spot for aquaculture, something Derksen said his colleagues in Ontario observed when he took the job in the early 2000s.

At that time, the Alberta government was exploring the idea of using grass carp, an herbivorous fish, as an alternative to pesticides to control excess vegetation in irrigation canals. The idea worked and the program even provided fish to farmers for weed control in their own sloughs and dugouts.

The problem: the fish had to be removed at the end of every season and they didn’t overwinter well in pens.

Selling fingerlings to farmers had potential, but regulations stipulate they must be sterile, generally through a simple process that makes them genetically triploid (three sets of chromosomes) rather than the usual diploid. The technique is standard for non-native fish such as rainbow trout and salmon used to stock lakes all over Canada.

However, some carp have a reputation for becoming invasive, so regulators stipulated an extra step. Each grass carp fingerling had to be tested and confirmed sterile before shipping. This drove up the cost to $20 per fingerling, higher than the market would bear.

While these factors made the canal clean-up program untenable, it didn’t take fish off the table.

Derksen and his colleagues continued their research into aquaculture. They specialize in RAS systems, specifically aquaponics, which is a combination system that produces food plants using water enriched by the nitrogen from fish waste.

Aquaponics is a little tricky to set up, but once it’s running it delivers two product streams — plants and fish — and is more stable. The Lethbridge facility has been running aquaponics systems since 2003.

“It is an ecosystem you’re trying to sustain and maintain, so it has to be balanced,” Derksen said. “So, you can’t just have a high density of fish and a low area of plant growth. You’re just going to get an overabundance of nutrients.

The lure of fish farming has Derksen responding to inquiries from greenhouse owners, livestock producers and even a pet food manufacturer, looking for information, answers and advice about a market that seems primed to take off.

Fish farming checks a lot of boxes, both from a practical and marketing standpoint. It has the potential to reduce pressure on overfished wild stocks, while providing high-quality protein to meet growing demand.

RAS systems use scarce water resources extremely efficiently and can be located close to population centres or food or feed processing facilities. This avoids the challenges of pandemic-strained supply chains.

Also, fish farmers deliver one thing better than any other livestock producer: omega-3 fatty acids. The nutrients are essential building blocks for brain health and function such as learning and memory. With the boomer generation reaching an age where dementias are becoming a concern, this could be a strong selling point for more fish in diets.

“The thing with fish is that it is omega-3s that have been the big selling feature for people eating fish,” Derksen said. “Because of that, there’s been a lot more avenues, other protein sources, trying to get in on that omega-3 market and you’ve seen it in eggs having omega-3s.”

While some crops, such as flax, have some omega-3s, levels are many times higher in fish.

But there’s a catch. While fish such as tilapia are herbivores, close to three quarters of the farmed fish in Canada are salmonids — carnivorous species such as salmon and trout. In the wild, these animals eat other fish. Their farmed cousins consume feed pellets made of species such as menhaden (a small ocean fish similar to sardines), but these wild stocks are also under pressure.

This is driving research into alternatives, which presents challenges. First, the product must taste good to the fish or they won’t eat it or even recognize it as food. It must nourish them, providing all the nutrients in a form the fish can digest. Finally, any fish food recipe must not impart any off-flavours to the final product to finicky human consumers.

“One of the things we talk about internally quite a bit is, you change the diet, you change the health of a nation,” Wulf said. “The more we can provide a healthy protein like salmon, make it affordable and accessible, and have it taste great, you know we’ll change diets and that changes health.”

Certain canola protein fractions show promise to supply some of the fishes’ nutritional needs, and algae-based solutions are also being looked at.

While these opportunities may lie somewhere in the future, Wulf said aquaculture facilities provide some immediate benefits. Fish waste, like that from any livestock, is high in nitrogen and makes excellent fertilizer. RAS facilities also provide a range of jobs, from someone to feed the fish to skilled technicians who can build and maintain the sophisticated water circulation and treatment systems, to researchers to develop new technologies.

“Our purpose is to feed a growing population by transforming aquaculture with technology,” she said. “And the types of technology we believe will play an increasing role are the use of land-based RAS farms and biotechnology.”