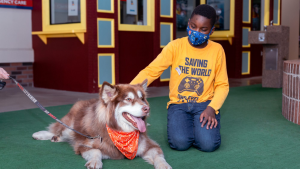 A Malamute named Ichabod who was rescued from the Yulin dog meat trade is now comforting children as a therapy animal.

Non-profit organization No Dogs Left Behind saved Ichabod in Yulin, China, in 2019. Activists reportedly rescued the dog right from a truck on its way to a slaughterhouse.

Ichabod was flown to the US, where he was taken in by Gayle Ellias after she spotted him on No Dogs Left Behind’s adoption page, PEOPLE reports.

Recognizing his calm, non-reactive temperament, Ellias signed herself and Ichabod up to be certified by the Alliance of Therapy Dogs (ATD).

The duo completed the tests on their first attempt, and Ichabod received his certification in November.

Since then, the Malamute has provided comfort to students affected by the school shooting that took place in Detroit, Michigan, on November 30.

He also visits children at The Friendship Circle of Michigan, a non-profit offering support to individuals with special needs and their families.

“Kids move quickly, they may jump up and down or make noises, and he doesn’t react to any of that. And I think that feels safe for kids,” Ellias told PEOPLE. “And they will then acclimate to petting him and getting close. For some kids, it’s a win if they just get closer to him.”

Ichabod does not have full use of his back legs due to patella luxation, whereby the kneecap dislocates and moves from its typical position. Ellias maintains that his condition inspires the children he meets.

“They’ll learn a little bit about his story, and then he’ll get up and move, and they see that he’s disabled. And it’s really powerful,” she explained. “And I think it’s so encouraging.”

ATD named Ichabod’s rescue a “miracle,” and praised his new family for using his story to help others.

“Certainly, the miracle of Ichabod being saved and being brought into a loving family was a great story in itself, but what really stood out is how Ichabod and his new family are paying it forward and helping others,” the organization said.

“It’s awesome he is such a loving soul after all he’s been through. Ichabod being a special needs dog himself, allows him to connect on a deeper level with those who are a part of The Friendship Circle.”

The “forgiving” nature of animals also helps people connect with him, Ellias says.

She explained, “Dogs can witness and experience the unimaginable and still give back to the human race. Dogs have unconditional love, and they’re survivors, and they share.”

The post Disabled Malamute Rescued From Dog Meat Trade Is Now A Therapy Animal For Children appeared first on Plant Based News.