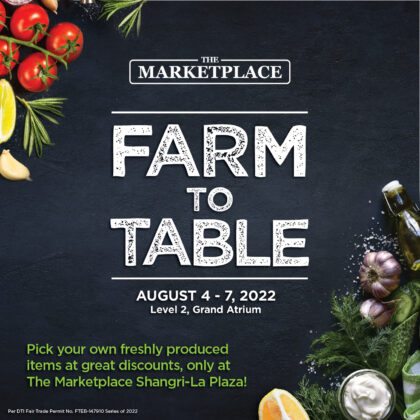 IT is all set to be a “Dealightful” month as Shangri-La Plaza’s The Marketplace is bringing back its popular Farm to Table market at the Grand Atrium on Aug. 4-7 to continue its support of local farmers. The farmers’ market features a wide range of locally grown organic products, as well as some carefully curated imported selections. It also introduces a number of new experiences for mall guests this year, including the Dizon Salad Bar that lets shoppers create their own salads using fresh ingredients on the spot. For P999, mall guests can join the Fresh Harvest All-You-Can, where they can fill their baskets with as much produce as they can in 60 seconds. This will be held on Aug. 6 from 3-9 p.m. The Marketplace is also supporting the Make-A-Wish Foundation — every purchase at Farm to Table helps fill care boxes with fruits and vegetables for children who are battling critical illnesses. For updates and inquiries, follow Shangri-La Plaza on Facebook at www.facebook.com/shangrilaplazaofficial and on Instagram @shangrilaplazaofficial.

SALADSTOP! has added a classic seasonal favorite to join the Daily Bowls line-up of exclusive salads for subscribers. Previously available in 2019 and 2021 as a seasonal salad, the Cauli-fornia Dreamin’ salad is a mix of romaine, red and white cabbage, cauliflower cheese patty, broccoli, cherry tomatoes, baked mushrooms, carrots, mandarin oranges, dried cranberries, and pumpkin seeds, tossed in a creamy Basil Pesto dressing. Unique to this vegetarian salad is the Cauliflower Cheese Patty, which is made from scratch using three different types of cheeses: feta, parmesan, and cheddar. The Cauli-fornia Dreamin’ salad or wrap is now available as a Daily Bowls Exclusive. As a special treat to launch this new exclusive on the Daily Bowls menu, subscribers can enjoy 15% off on all Daily Bowls subscriptions when they sign-up until Aug. 6 at saladstop.pickup.ph. (Delivery of subscriptions start on Aug. 8.) The Daily Bowls Exclusives menu is a lineup of never-before-released salads, wraps, and warm proteins that can only be ordered with a three-day or five-day plan. Daily Bowls Exclusives are available for delivery on Fridays with every subscription plan.

JOLLIBEE is now serving Chicken a la King Pie, a new and uniquely crispy twist on a creamy classic. It features a creamy chicken-based filling in Jollibee’s signature crispy golden pie crust. Jollibee’s Chicken a la King Pie is now available in all stores nationwide for P59 (Solo), P99 (Value Meal with drink), P140 (Super Value Meal with fries and drink), and P175 (Trio). It can be delivered via the Jollibee Delivery App, JollibeeDelivery.com, #87000, GrabFood, and foodpanda. It is also available in-store, drive-through, and for take-out.

WITH the arrival of its newest chicken sandwich player, Chicken King, Burger King has seen it taking over BK stores. In photos launched on Burger King Philippines’ Facebook page, the restaurant’s facade, menu board, and dining area, is now all about the Chicken King. The chicken sandwich contains a generous chicken thigh muscle patty (marinated in herbs and spices and cooked to a golden brown) which is tucked between buttery potato buns with fresh tomatoes and lettuce, and topped with mayonnaise. The addition of Chicken King to BK’s menu is the restaurant’s latest move to expand its kingdom in the chicken sandwich territory. Chicken King is now available at select stores in Mega Manila, Pampanga, Rizal, Cavite, Laguna, and Bulacan, and can be ordered via  BKdelivery.com.ph, and partner delivery services like Grabfood and Foodpanda.

EXPERIENCE Nordic heritage, cuisine, and culture all in one night at the SKÅL: Viking Party Manila on Sept. 24, at the Harbor Garden Tent, Sofitel Manila. There will be a buffet of Nordic delicatessen, accompanied by free-flowing drinks including aquavit, schnapps, and vodka. There will also be non-stop entertainment on stage, with hits from the 1970s, ’80s, and the iconic Swedish band, ABBA. There will also be a grand raffle with exclusive resort stays, worldwide air tickets, and other exclusive prizes from sponsors up for grab. Proceeds from this event will be donated to the Chosen Children Village Foundation, a home for mentally handicapped and orphaned children. This event is organized by the Nordic Chamber of Commerce of the Philippines in partnership with Sofitel Philippine Plaza Manila.

TO CAP off the summer season, Starbucks is introducing new drinks and bringing back classic flavors. Two new Starbucks Refreshers beverages are now available: The Strawberry Açaí with Lemonade Starbucks Refreshers and the Pink Drink with Strawberry Açaí Starbucks Refreshers (both contain caffeine). Starbucks is also bringing back the Oatmilk Cocoa Series: Oatmilk Cocoa Macchiato Signature, espresso blended with smooth oatmilk and vanilla syrup, topped with cocoa sauce; Oatmilk Cocoa Frappuccino, a blend of oatmilk, espresso, and ice, topped with plant-based whipped cream, cocoa drizzle, and cocoa powder. The beverages are available in stores and via GrabFood and foodpanda. New on the menu are Chocolate Cherrific Cake, Strawberry Lemonade Cheesecake, Chunky Monkey Chocolate Cookie, Chocochip Brownie, Meatless and eggless breakfast sandwich on plant-based brioche bread, Banana Chocolate Cream Pudding, and Fusilli Meatless Bolognese. Returning to the menu are Kouign Amann and Blueberry Cheese Pocket. New Starbucks merchandise is also available Including Color Wave Cold Cups and the coffee company’s first Back-to-School collection. There is also an Eco-Camping line of tumblers and mugs made with stainless steel and compostable PLA. The merchandise is available in all Starbucks stores and on the Official Starbucks Flagship store on Lazada and Shopee while supplies last.