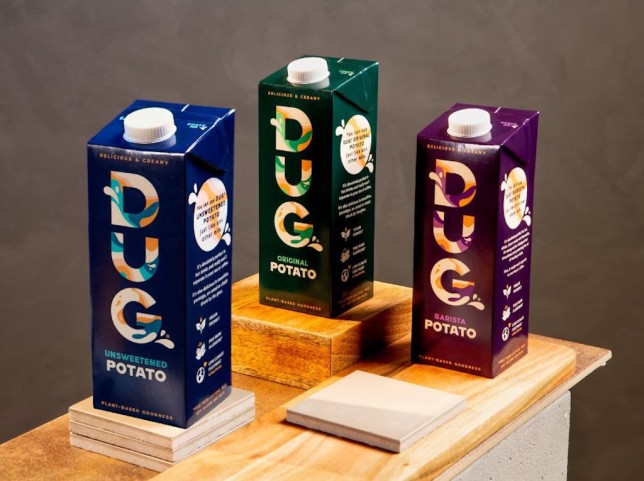 As more and more people choose to avoid dairy and animal products, dairy alternatives have been booming in the UK with the market now worth around £400m a year. Current research suggests that one in three Brits now drink plant-based milk with usage up from 25% in 2020 to 32% in 2021.

At first we had to make do with just soya milk as an option…it wasn’t a bad thing…but then came nut and oat and even pea milk. Nice. But now we have something even more creative joining the plant milk gang. Potato milk. Yes indeed, the clever people working behind the scenes at plant milk factories across the globe have created a new variety that has been described as “deliciously creamy” and that works perfectly in a latte, cappuccino or even the humble cup of tea.

One brand to hit the shelves first is Sweden-based, Dug, available in hundreds of Waitrose stores as of the start of this week.

Waitrose commented that sales of plant-based milks have risen by almost a fifth in the previous year, compared to 2019; oat remains the favourite thanks to popular household names such as Oatly, followed by almond, soya and coconut. However, the supermarket believes that this year will see potato milk reaching new heights and that this year may even be “the turn of the potato” to reign supreme.

And Dug will probably appeal to the environmentalists among us too. Describing itself as a “super sustainable” brand and having worked with CarbonCloud, a company that calculates climate footprints of food to prove ethical credibility. Dug is confident its footprint is significantly lower than dairy milk, arguing that growing potatoes is twice as efficient as growing oats and that water requirements are much less than harvesting ingredients such as almonds.

We’d love to hear your thoughts on your favourite plant milks and in particular if you’ve tried potato milk yet. Let us know your thoughts!