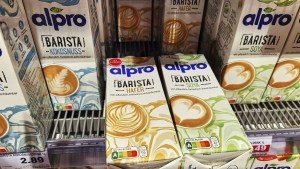 Dairy giant Danone has announced it will transform one of its dairy factories into plant-based, in order to produce Alpro plant-milks.

The facility is located in Villecomtal-sur-Arros in France and is part of a €43 million ($49m) investment plan to ramp up production.

It comes four years after the company acquired Alpro.

Understood to be the world’s largest yogurt producer, Danone will now use its French facility to make mainly oat milk.

The work will begin in 2022, Reuters reports. And comes after the company revealed the market for plant-based products in France had tripled in seven years and should climb to a further 50 percent by 2025.

As of 2023, Alpro will commence plant milk production in the facility.

It comes just a month after Danone revealed it will invest millions of euros into one of its UK factories, with a view to producing 300 million liters of plant milk year on year.

Alpro has had the factory for more than 20 years, but thanks to soaring investment, Danone funneled £17 million into “state of the art” equipment.

The plans include facilities aimed at reducing energy, water, and CO2 usage.

The changes will be made to the company’s factory in Kettering, where products are made for customers in the UK and Ireland.

General manager Sue Garfitt says the brand has been “blazing a trail in sustainable production for more than 40 years.” And soon, Alpro hopes it can increase its annual production to a staggering 400 million liters by 2022.

“The changes we are installing will not only accelerate the volume of products we are producing in the UK, for UK shoppers.

“But, will also allow us to keep ahead of the curve and continue being the brand to fuel the category growth.

“And, whet the nation’s appetite for delicious and healthy plant-based products, and of course, doing this whilst operating in a planet-friendly way,” Garfitt added in a statement.