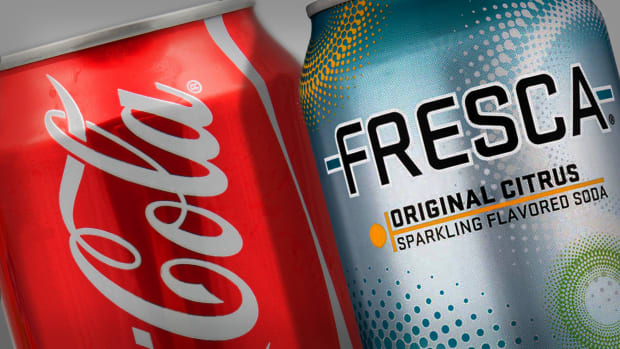 The all-American soda has always been marketed as wholesome. Now, it's going someplace new.

It's hard to think of something more uniquely American than Coca-Cola (KO) - Get Coca-Cola Company (The) Report.

The company's signature cola may not be good for you, but it's pretty universally loved and its popularity has endured since its launch in 1892. Coca-Cola has been very protective of its core brand and its overall reputation.

Coke may not actually be on par with baseball and apple pie, but the company wants people to believe it is. That has kept the Coca-Cola company from venturing into alcoholic beverages. It actually avoided doing that completely until 2021 when it launched an alcoholic version of its Topo Chico seltzers and then again in 2022 when it partnered with Constellation Brands (STZ) - Get Constellation Brands Inc. Report for a hard version of its Fresca beverage.

The company was not subtle about its reasons for adding alcohol to two of its lesser brands, sharing the reason in a press release.

The $8 billion Adult Alternative Beverages and RTD cocktails segment is projected to grow at least 15% over the next three years, and the spirits-based RTD category is projected to grow at annual rate of +33% in volume by 2025. FRESCA™ Mixed will appeal to consumers searching for fuller-flavored experiences and higher-quality RTD cocktails to bridge between refreshing hard seltzers and full-flavored bar cocktails.

But Topo Chico and Fresca are most certainly not Coke, and Coca-Cola has avoided making its own version of the two best-known pairings of its signature soda: rum and Coke and Jack & Coke. Now, in partnership with Brown-Forman, Coca-Cola plans to put one of those beloved drinks in a can.

Coca-Cola Launching Jack & Coke In a Can

There are few drinks more widely known and universally popular than Jack & Coke. Brown Forman (BFA) and Coca-Cola have partnered on a ready-to-drink (RTD) canned beverage that mixes Coca-Cola with Jack Daniel’s Tennessee Whiskey. This new version of an old classic will be available in markets around the world, with initial launch planned for Mexico in late 2022.

“This relationship brings together two classic American icons to deliver consumers a taste experience they love in a way that is consistent, convenient, and portable,” said Brown Forman CEO Lawson Whiting. "Coca-Cola perfectly complements Jack Daniel’s and our existing RTD offerings, enabling us to accelerate expansion and continue to grow our business around the world.”

Coca-Cola does want to make it clear that making the decision to offer a hard version of its cola was not made easily. The company highlighted its efforts to make sure its new offering is marketed to consumers.

The cans and packaging for the new drink "will feature two of the world’s most recognizable and valuable trademarks in Coca-Cola and Jack Daniel’s, will include clear responsibility symbols stating that it is to be enjoyed only by consumers of legal drinking age. Jack Daniel’s & Coca-Cola RTDs will adhere to responsible marketing practices held by Brown-Forman and The Coca-Cola Company."

Alcohol content for the RTD Jack and Coke will average 5% but will vary by market. The two companies will also offer a zero sugar version of the drink.

“We keep consumers at the center of everything we do as we continue to develop our portfolio as a total beverage company, and that includes new products with our iconic Coca-Cola brand,” said Coca-Cola CEO James Quincey.