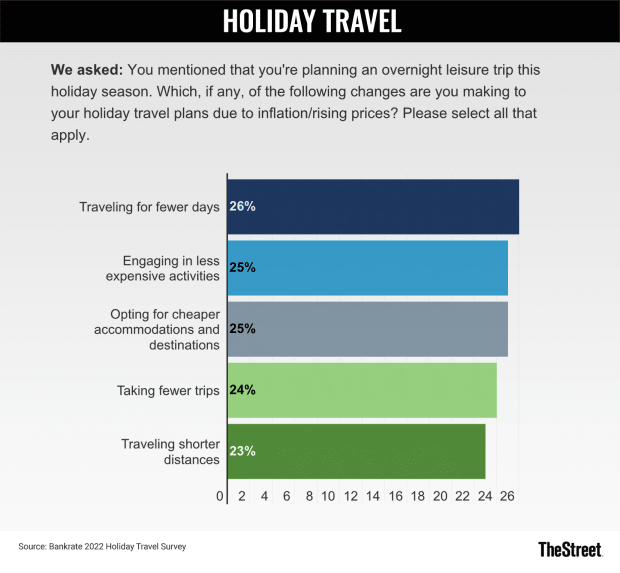 A new Bankrate survey looks at how inflation is chipping away at many people's travel plans.

You may be home for Christmas but, with inflation taking its toll, it may be for fewer days or with the relatives who live nearby.

A recent Bankrate survey of 2,455 adults found that, out of the 43% of American adults who plan to travel this holiday season, nearly eight in 10 are altering their plans due to the higher cost of everything.

In August, the consumer price index was at 8.3% — a slight month-to-month drop after more than a year of acceleration.

While plane and bus tickets saw modest increases compared to monthly energy bills and certain types of common foods like eggs and chicken, rising costs have been affecting people of all income brackets — those earning more may put off that winter trip to the tropics while those already struggling to make ends meet may put off a trip to the grocery store simply to save gas.

Who's Not Coming Home For The Holidays?

The holidays are a period when many travel to see family or spend time in a warmer climate but also a time when many spend more than they'd like.

According to Bankrate, 26% of those who will be adjusting this year's travel plans will cut the days they spend away. The survey includes both those traveling to stay with family and those taking an annual winter trip — in total, 25% said they plan to opt for less expensive destinations and accommodations.

(For those looking to cut back, staying with family has long been the cheap alternative.)

Another 25% will go for less expensive activities — think enjoying one's company around the campfire rather than paying for ski lift passes or relaxing in hot springs surrounded by the snow-capped mountains.

Some 23% said they'd travel shorter distances while 24% may put off a trip they had planned altogether.

"Escalating airfare and gas prices are a factor in many of those decisions," reads the report. "In fact, 23% of travelers say they will drive rather than fly to their holiday destinations."

How People Are Paying For Travel

The number of people changing plans is consistently high even for higher earners. The study found 79% of those earning between $50,000 and $79,999 said they're changing their travel plans due to rising prices.

Younger people are also more likely to change their travel plans than Generation Xers and boomers.

"If you want to maximize attendance at holiday festivities this year, consider gathering near your youngest family members to eliminate some of the financial strain on those most likely to experience it," reads the report.

The idea of not taking a desired trip is never pleasant -- 31% said that potential disruptions are causing them stress while 22% said they feel pressure to spend more than they feel comfortable.

To spread out the costs, 38% of those polled said they plan to cover travel expenses with a credit card they'll pay off in full before interest starts to add up while 18% will pay off credit card costs over time.

A further 21% plans to use credit card rewards points for things like plane tickets and hotel stays.

"Many people have amassed a lot of these and haven’t traveled much the past few years, so it's a good time to cash them in," Ted Rossman, a senior industry analyst for Bankrate, said in a statement. "They won't get more valuable over time."