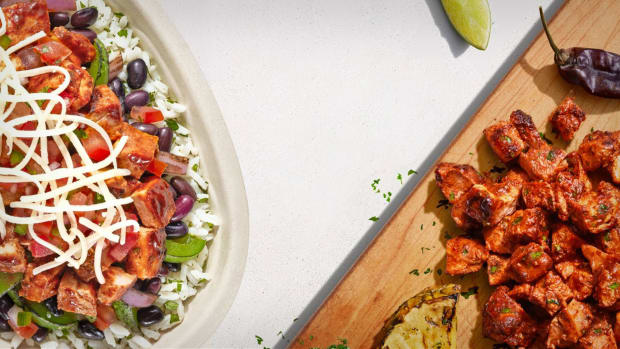 Fans of adventurous flavors will have a new reason to visit Chipotle soon thanks to the addition of a new protein.

Once the floodgates of tinkering with a chain's menu open, there's no saying what will come next.

Until March of last year, Chipotle  (CMG) - Get Chipotle Mexican Grill Inc. Report had one chicken entrée since its first fast-casual restaurant opened in Denver in 1993. While the chain experimented with main dishes like tofu sofritas and a chorizo-style pork dish, grilled chicken has been its only chicken entrée for the next 29 years.

This changed when, in March 2022, Chipotle announced that it was bringing in chicken asado after testing it in select Sacramento and Cincinnati markets in 2021.

Inspired by the grilling style popular across South Africa, the pollo asado uses garlic, lime, and guajillo peppers to bring customers chicken with a tangier taste.

"Chicken is easily our most popular protein, with many of our most loyal Chipotle customers ordering it the majority of the time," Chris Brandt, Chipotle's chief marketing officer, said at the time. "We're thrilled to introduce fans to another flavor of chicken that brings a whole new dimension to any Chipotle order and will certainly be a crowd pleaser."

Another New Chicken Dish Is Coming To Some Markets

Less than a year later, Chipotle is once again setting its sights on chicken.

Marinated in a blend of adobo, morita, and achiote, a new chicken al pastor is currently being tested in 94 restaurants across the Denver and Indianapolis areas.

The menu item is being presented as a chicken dish for those looking for a spicier alternative.

"Following the success of Pollo Asado, Chipotle is testing a new premium chicken option that adds an exciting level of spice to guests' go-to orders," the company said in a statement. "Prepared in small batches throughout the day, Chicken Al Pastor is made with Responsibly Raised, freshly grilled chicken seasoned with a powerful marinade of Chipotle's signature adobo, seared morita peppers, and ground achiote with a splash of pineapple."

Chicken al pastor is currently available both in-restaurant and online at the selected Denver and Indiana locations, while you can order it for free delivery from September 6 through September 11.

The Chicken Wars Are Over More Than a Sandwich

Some locations reported round-the-block lines for the sandwich even as staff were putting up handwritten "sold out" signs.

Over the next two years, everyone from Wendy's  (WEN) - Get Wendy's Company (The) Report to Starbucks  (SBUX) - Get Starbucks Corporation Report and Panera Bread  (PNRA)  all tried to get in on the craze and released some type of bun holding a piece of fried chicken. Yum! Brands  (YUM) - Get Yum! Brands Inc. Report-owned Taco Bell even tried to make a fried chicken taco happen.

While some analysts have argued that the market is now oversaturated with subpar versions of chicken sandwiches, demand for the protein is still strong even as inflation has been pushing many fast-food chains to raise their prices.

While the U.S. Department of Labor Statistics reported that food costs rose by an average of 11.9% between 2021 and 2022 in May, chicken prices rose by more than  17%.

In April, pasta chain Noodles & Co.  (NDLS) - Get Noodles & Company Report said that it would temporarily add a $1 surcharge to all chicken dishes to offset the rising costs of poultry.