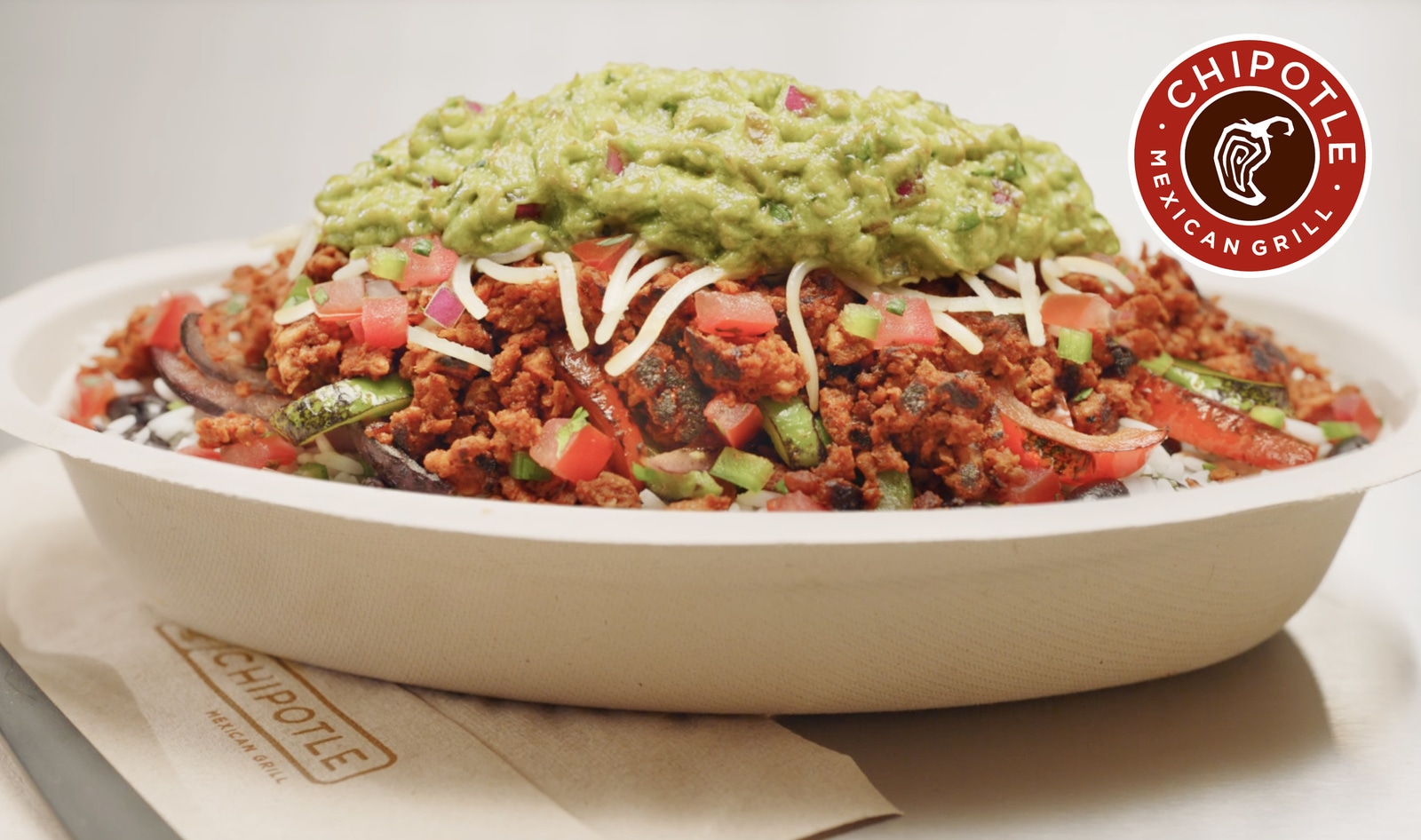 Today, fast-casual chain Chipotle Mexican Grill is expanding its first vegan chorizo protein option to all of its more than 2,700 locations nationwide. The national expansion follows a successful test of the vegan chorizo in August at 103 Chipotle locations in Indianapolis, IN; Denver, CO; and Orange County, CA. The new Plant-Based Chorizo was developed in-house as a minimally processed meat alternative. The vegan-certified meat option is made with a base of pea protein (a common ingredient found in other vegan meats such as the Beyond Burger) that is flavored with ancho chilies and chipotle peppers, tomato paste, crushed garlic, Spanish smoked paprika, and extra virgin olive oil.

“We are thrilled to introduce guests to our new, flavor-packed Plant-Based Chorizo during a season when healthier options are top of mind,” Chris Brandt, Chief Marketing Officer at Chipotle, said in a statement. “Plant-Based Chorizo is our best chorizo ever and proves that you don’t have to sacrifice flavor to enjoy a vegan or vegetarian protein.”

Entrées featuring the Plant-Based Chorizo start at $8.50 at the customizable chain, which also offers a variety of vegan toppings and fillings, including vegetables, beans, salsas, rice, and guacamole. To promote the launch, Chipotle will offer free delivery on any Plant-Based Chorizo orders placed via the Chipotle app and Chipotle.com from January 3 through January 9.

The new Plant-Based Chorizo is Chipotle’s second vegan meat option, following the 2014 launch of sofritas—an organic tofu-based shredded vegan meat spiced with poblano pepper, cumin, and chipotle chiles. In 2019, Chipotle debuted the sofritas-topped Vegan Bowl as a permanent menu item as an extension of its Lifestyle Bowls line, a selection of preconfigured menu items created to appeal to customers who follow diets such as paleo, keto, and Whole30.

“Creating a delicious plant-based protein that sizzles on the grill with the robust flavor and texture profile chorizo-lovers expect was a real challenge,” Nevielle Panthaky, Vice President of Culinary at Chipotle, said in a statement. “Our culinary team has worked relentlessly for years to develop this breakthrough Plant-Based Chorizo recipe that is uniquely Chipotle and aligns with the brand’s industry-leading Food with Integrity standards.”

Chipotle is running a similar promotion for its Lifestyle Bowls, any of which—including those that contain the new vegan chorizo—can be ordered through its website and mobile app for free delivery between January 3 and January 31.

In 2018, Chipotle sold 7.5 million pounds of sofritas, its first formidable vegan protein. Since then, the chain has been working with its existing menu items to create options that appeal to customers with specific dietary needs.

Last year, Chipotle leaned further into the keto and vegan trends by launching Cilantro-Lime Cauliflower Rice—one of five items that made it through Chipotle’s stage-gate process from 2019 to 2021. Made from grilled and riced cauliflower that is finished with hand-chopped cilantro, lime, and salt, the low-carb rice is available as part of a variety of dishes.

Over the years, Chipotle has promoted its vegan options in fun ways. In December 2020, the chain offered The Guac Is Extra but So Is Miley Burrito. Made to mimic formerly vegan pop-star MIley Cyrus’ go-to burrito order, the option was white rice, black beans, fajita veggies, roasted chili-corn salsa, tomatillo-red chili salsa, romaine lettuce, and guacamole. The name for the vegan burrito came from a humorous interaction between Chipotle, fans, and Cyrus on TikTok.