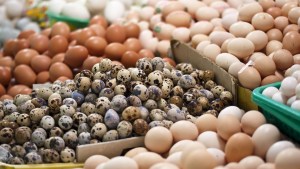 Cogs have been set in motion to phase out the use of cages for hens in China‘s egg industry. For the first time, a set of standards has been drawn up by a coalition of organizations in the country.

This is in order to follow in the footsteps of Europe and the US to increase welfare for chickens.

As part of the Evaluation Guidelines of Cage-Free Egg Production, the changes will take place between now and 2025.

A report released last October detailed a nationwide criteria for egg producers. In summary, it informs players in the egg trade on how to improve their facilities. Additionally, it provides retailers the chance to evaluate suppliers on their states of welfare.

At the summit where the standard was announced, the CCFA’s vice president Chu Dong said that all producers that meet the standards will be able to label their products “cage-free.”

According to The Poultry Site, the document marks a “milestone” in making shopping easier for consumers and in unifying a definition of the “cage-free” label.

But the Global Coalition for Animal Welfare (GCAW) recommends that traceability and government engagement is required to ensure the easiest transition.

Additionally, the cost of transitioning to cage-free must be considered in order to support egg producers. Moving forward, the organization says it will work with suppliers to explore the development of cage-free production.

By a landslide, China is the biggest egg producer in the world. This has been the case for the past three decades, and is largely on the rise.

But currently, it doesn’t behold any marketing or labeling standards.

While the report has been widely welcomed by campaigners, the GCAW says mandatory cage-free egg production standards remain unlikely.

“Linking cage-free egg production to a quality, safe food product is key in order to benefit producers,” the organization says.

Removing cages elsewhere in the world

It’s not just China that is showing signs of ramping up animal welfare in agricultural systems.

Europe will ban cages in its farming system by 2027 following pressure from NGOs.

In September last year, a bill was introduced by the UK government to ban cages for laying hens entirely. The campaign to ensure it is passed is ongoing.

Elsewhere, New Zealand, or Aotearoa as it is known in Māori, confirmed a ban on battery cages. It will come into effect this year.

But animal advocates have also made calls to end colony cages, which are larger than their battery counterparts but still leave hens with living spaces so cramped campaigners have long labeled them cruel and unacceptable.