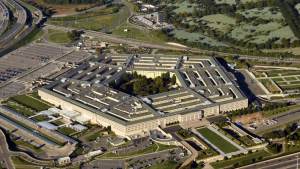 Officers have caught a mysterious chicken “sneaking around” at the heavily guarded Pentagon. Where she came from, why she was there, and how she got in is still unknown.

The hen was discovered near the US Department of Defense headquarters on early Monday morning. She was then “taken into custody,” The Associated Press reports.

The Animal Welfare League (AWL) of Arlington, Virginia, later collected the bird, who is thought to be a Rhode Island Red. The charity has since named her Henny Penny.

“Apparently, the answer to ‘why did the chicken cross the road’ is to get to the Pentagon?!” the animal shelter wrote on Twitter. “This chicken was caught sneaking around the security area at the Pentagon (we’re not kidding), and our officers picked her up.”

The details surrounding the bizarre scenario are intentionally unclear.

“For actual security reasons we are not allowed to disclose the exact location [Henny Penny was found],” the charity’s Chelsea Jones commented. “We can only say it was at a security checkpoint.”

The Pentagon is the world’s largest office building, with around 6.5 million square feet (150 acres) of floor space. The facility, considered a symbol of American military power, employs nearly 30,000 military and civilian personnel.

Last year, reports revealed that the Pentagon has a “secret army” made up of around 60,000 people. Some members allegedly work undercover at several of the world’s leading companies. It’s the “largest undercover force the world has ever known,” according to Newsweek.

The chicken’s peculiar adventure made headlines around the world. On a just-aired episode of The Tonight Show Starring Jimmy Fallon, the host performed a song about Henny Penny.

“There’s a chicken at the Pentagon and no one knows why. Are you a normal clucker or an undercover spy?” Fallon sang, joking that the government is “panic-stricken” by the situation.

AWL Arlington’s Jones describes Henny Penny as “beautiful” and “sweet” but also “nervous.” However, the hen has allowed some people to pet her.

The organization confirmed on Twitter that the chicken “will be going to live at a local animal sanctuary very soon.”

Henny Penny is the latest animal to make headlines after embarking on a solo trip. In December, a young calf named Stacy broke out of a slaughterhouse in New York. She now lives at Skylands Animal Sanctuary and Rescue.

Further, in June, a pregnant sow escaped from a meat farm to give birth to ten piglets. Surge Sanctuary in the UK took in the mother pig and her babies.

The post Chicken Caught ‘Sneaking Around’ The Pentagon Rescued By Animal Sanctuary appeared first on Plant Based News.