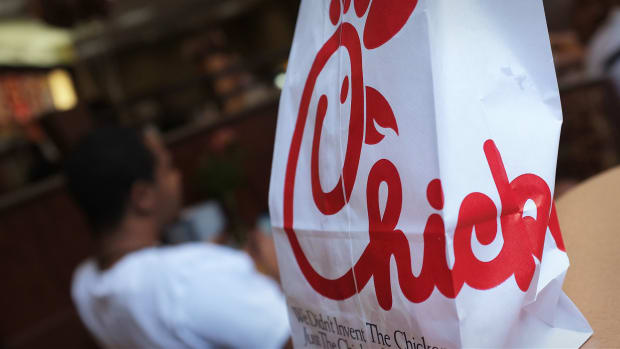 Did the beloved fried-chicken chain Chick-fil-A borrow a woke idea from Starbucks and will fans react the way Cracker Barrel's customers did?

People love Chick-fil-A. The fast-food chicken chain has used a relatively limited menu that leans heavily on its signature fried-chicken patty to become not just popular but loved.

Other fast-food chains are popular -- think McDonald's  (MCD) - Get McDonald's Corporation Report and fried chicken rival Popeyes. But consumers view those brands in different ways. Chick-fil-A sells a lot of chicken and it ranks at the top of the annual American Customer Satisfaction Index by an overwhelming amount.

The chicken chain, which is famously closed on Sundays, scored an 83 on the 2022 ACSI, beating the category average of 76. And while the overall industry dropped by 2 points on the 100-point scale, Chick-fil-A put up the exact same score as it did in 2021.

Chick-fil-A has topped the ACSI for eight straight years and the company has built its reputation on consistency and great service.

So any changes become a bit risky, something the company does not take lightly.

Chick-fil-A has not changed its breakfast menu since it added the Hash Brown Scramble Bowl in 2017. That's a fairly typical fast-food offering that clearly made sense on the chain's menu.

Its new offering, Chorizo Cheddar Egg Bites, looks a lot like the egg bites that Starbucks (SBUX) - Get Starbucks Corporation Report has had on its menu since 2017.

The Atlanta chain explained its new offering in a news release.

"Chick-fil-A is helping customers start their morning by testing a new bold and bite-sized option, Chorizo Cheddar Egg Bites, on the breakfast menu in select markets," the company said.

"The Chorizo Cheddar Egg Bites are baked in-house every morning and are made with whole eggs, Mexican-style chorizo sausage, and a blend of cheddar and Monterey Jack cheeses, offering bold flavors in each bite."

Is Chick-fil-A Risking a Woke Backlash?

Chick-fil-A has built its business around its "original Chick-fil-A Chicken Sandwich and signature hospitality," the company says on its website.

It's also not shy about its owner's Christian values and that the owner, Dan Cathy, has openly donated to causes that support anti-LBGTQ legislation. The chain did change some of its donation practices in 2020, dropping some of the more controversial nonprofits it supported.

It's fair to say that Chick-fil-A has courted a right-leaning audience while also being just broadly popular. That puts the chain at risk of a backlash like the one Cracker Barrel recently faced when it added plant-based sausage to its menu.

Cracker Barrel customers, at least on social media, seemed to think that adding a choice for people who don't eat meat (or even just want to skip it for a meal) betrayed the chain's values. They saw it as the company caving to woke thinking rather than simply trying to attract more customers by offering more choices.

Egg bites are perhaps not perceived to be as woke as plant-based meats, but their origin, at least on a national level, at Starbucks could fan some of the same flames. Starbucks egg bites are gluten-free, which the chain has promoted, and it offers versions that do not contain meat.

Chick-fil-A has not provided an ingredient list for its new egg bites, but the chain will likely not promote them as gluten-free even if the ingredients technically are. That's not the company trying to avoid appearing woke; it's a practical admission that in its kitchens, gluten-free and gluten-containing products may be cooked on the same equipment.