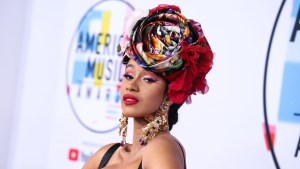 The entertainer took to Twitter for advice. “I want to go vegan but I love meat,” she said to her 20.4 million followers. “Are vegan meat replacements similar to meat in taste or not really?”

The Tweet raised eyebrows, sparking conversation about the perceived benefits and downfalls of plant-based diets.

“[Vegan meats are] seriously unhealthy. How they are made is bad for the environment,” one user wrote. This is despite the fact that animal products – especially beef – are some of the most environmentally destructive foods on the planet.

In fact, an oft-cited analysis on farming’s effect on the planet concluded that going vegan is likely “the single biggest way” to lower your environmental impact.

The study, which included data from nearly 40,000 farms in 119 countries, is the largest of its kind.

The Twitter user continued: “Our ancestors ate meat and were much stronger and less whiny! Don’t do it just to follow the trend. You like meat so eat it and don’t be ashamed. You do you!”

Other commenters had a different take.

“​​Most vegans love the taste of meat. It’s a matter of realising animal products are beyond cruel, destroying the planet, carcinogenic,” they wrote, as well as “destructive” to the human digestive system.

In response to Cardi B’s post, a fan expressed shock that the rapper was “willing to let go” of the seafood she loves.

The musician explained, “I had a stomach virus not so long ago and I feel like my digestive system haven’t been the same. I been drinking probiotics and I don’t see a change much. I be lookin’ at raw food pages a lot but that will be a huge change for me to do that.”

The Grammy Award-winner has been exploring the vegan space for some time. Earlier this month, she launched a dairy-free, vodka-infused whipped cream.

And in 2019, she launched a vegan leather fashion line.

The post Cardi B Tells 20.4 Million Followers ‘I Want To Go Vegan’ appeared first on Plant Based News.