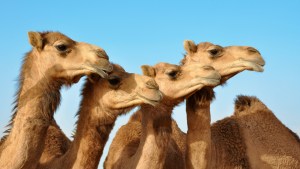 More than 40 camels have been disqualified from a beauty contest in Saudi Arabia after their owners “enhanced” their faces and bodies with botox and hormones.

Animal rights campaigners are branding the reconstructions of the animals as “hideously cruel.”

In the “biggest” crackdown on Saudi pageants of the sort, it was uncovered that owners had stretched the camels’ lips and noses, and used hormones to expand their muscles.

It occurred at the annual King Abdulaziz camel festival, which takes place across an entire month.

Here, breeders compete for a staggering $66 million in prize money, The Guardian reports. They judge each camel based on the shape of their heads, necks, and humps and also take into account their posture.

But following a slew of reports owners had been manipulating the animals’ appearances, strict penalties could be imposed.

However, campaigners say the clampdowns don’t go far enough and that animal welfare protections are lacking across the Middle East.

This is because the animals are “treated like slaves,” where they’re beaten and then slaughtered for their meat.

“Subjecting any animal to a cosmetic procedure, from ear cropping to declawing, dehorning, and filler injections is hideously cruel. And, shows the humans who use such tactics to be extremely ugly,” Baker added.

Animal rights in the Middle East

The contest has also incurred questions about wider animal rights issues across the Middle East.

It must be addressed across wider Asia too, where camels are forced to perform in circuses, Baker said. Further investigations show how camels are “beaten bloody” in the tourism trade.

He added: “PETA calls on Saudi authorities to crack down on any event that exploits and abuses animals, including this one, and to ban forcing camels, much-abused donkeys, and malnourished horses to give tourist rides.”

However, there have been steps towards establishing better welfare practices across the region this year alone.

For example, Turkey passed a new law meaning animals would no longer be classed as “commodities,” in a bill that acknowledges them as living beings.

PETA is also not alone in calling for a ban on circuses. HAYTAP, an animal rights federation in Turkey, criticized the new law because it doesn’t include zoos or fur farms.