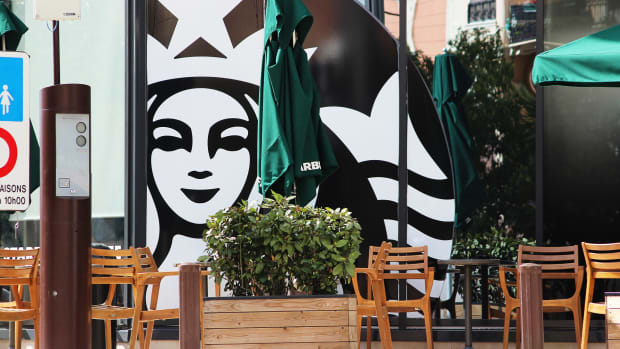 The casino operator has added a Vegas original to one of its high-end properties.

There are, of course, other coffee shops and Dunkin' has recently expanded its presence in the city. Starbucks, however, has become ubiquitous and it has worked to make its cafes as unique as the mega-resorts in the city. In 2011 Justine McHart, Starbucks designer for U.S. Licensed Stores, was tapped to build the Starbucks brand presence on the Strip with distinctive new licensed store designs.

“On the Las Vegas Strip, a customer can literally see all 35 stores in one visit, so it’s really important to differentiate each one,” McHart said. “We want people to feel the difference and generate buzz about our stores.”

Now, that number has greatly increased and the chain has continued to expand its portfolio on the Strip and throughout Las Vegas. Back in 2019, before the pandemic, Starbucks had 125 locations in Sin City, 1 location per every 5,133 residents, the most of any U.S. city, according to Apartment Guide.

Now, while no company -- even Dunkin' -- seems likely to rival Starbucks for Strip dominance, Caesars has welcome an upscale cafe into what's perhaps its most upscale location.

Not Another Starbucks Clone Hits the Strip

Cafe Lola, a cafe brand created by women to appeal to women, will open its fourth location inside the  Forum Shops at Caesars Palace.  The company, known for its brightly-colored cafes, describes itself as follows.

The chain also tries to differentiate its beverages from the traditional coffee shop lineup.

"Café Lola specializes in all things coffee & tea. We are known for our unique & specialty lattes. Some of our signature lattes: 24K Gold Crème Brûlée Latte, Signature Vanilla Rose & our Unicorn Hot Chocolate!"

Moving into Caesars upscale mall is a big step for the Vegas-created company.

“We’re a Vegas-grown brand. The natural progression is to be on the Las Vegas Strip,” Lin Jerome, who owns Café Lola with her business partner, Alexandra Lourdes told the Las Vegas Review-Journal. “We wanted to bring the experience to visitors and Las Vegas locals.”

The partners considered the Strip location after hearing from many of its customers that they were traveling from there to visit the small chain's Summerlin or Henderson locations, the paper reported.

“We’d always wanted to expand to the Strip,” Lourdes said, echoing Jerome. “The Forum Shops actually reached out to us. It was such a big honor they even thought about us, and we’re very excited.”

The Forum Shops also contains a Starbucks. Lola will offer many of its current menu items -- think unique lattes, teas using non-traditional ingredients, matcha, gluten-free choices, and more -- in a colorful environment meant to appeal to women. Breakfast is served all day and Lola plans to have some special items for its Strip location,

This will include a "house frosé, blended with bubbles, offered by the yardstick in a vessel resembling a giant Champagne bottle," the paper reported. There will also be a walk-up window serving frosé, coffee, and more to go.

Starbucks, of course, has nothing to worry about, but Las Vegas Strip visitors now have a unique alternative that may just take a few dollars away from the ubiquitous chain.