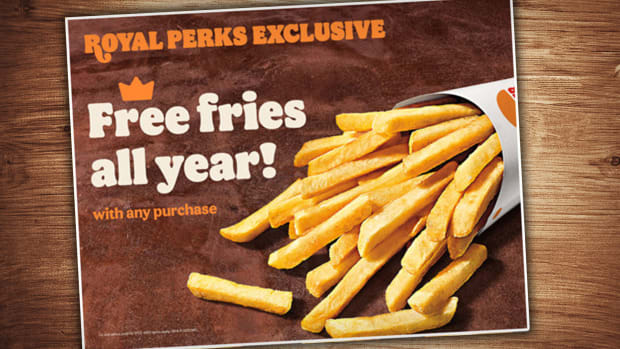 The fast-food giant has a new take on an old favorite that could be a huge hit.

Fast-food chains want to capture the public's attention not only by creating a new menu item but by finding something that people simply have to have. Those sorts of phenomenons rarely make sense.

The Starbucks (SBUX) - Get Starbucks Corporation Report Unicorn Frappuccino became a must-have item not because it was delicious (people had really mixed feelings about that) but because it was colorful, unique, and customers of all ages wanted to try it. It's rare for a coffee chain to have an item that kids were demanding their parents get for them, but that's exactly what happened here.

Creating the next big fast-food sensation is a mix of luck, marketing, and culinary skill. Some of the biggest ideas were truly innovative -- think the Yum! Brands (YUM) - Get Yum! Brands Inc. Report Taco Bell Doritos Loco Taco -- but many of the biggest hits simply caught lightning in a bottle.

McDonald's has set the standard for fast-food fries. That has led its chief rivals, Burger King and Wendy's (WEN) - Get Wendy's Company (The) Report, to endlessly try to come up with a better french fry. Wendy's continued this by recently redoing its french fries and making them the focus of multiple advertising campaigns that favorably compare them to McDonald's offering.

The problem is that despite taste tests and commercials telling you that Wendy's has better fries than McDonald's, the public still broadly thinks of McDonald's as the fast-food chain with the best fries. That's obviously a matter of taste, but nothing Wendy's or Burger King have done over the years (and they have tried a lot of times) has changed the perception that McDonald's leads the french fry pack.

Now, Burger King, the same chain that failed spectacularly with the lower-calorie "Satisfries," has a new take on the side dish that tries something completely different.

The number three burger chain has been aggressive in trying side dishes that aren't french fries. The chain is the only one of the big three that has onion rings on its permanent menu and it has also offered everything from mozzarella sticks to Mac 'n Cheetos as a way to steal some audience from McDonald's classic fries.

Now, the chain has  brought back another potato-based side, Cheesy Tots, according to a report from The Fast Food Post.

"Cheesy Tots feature melted cheesy potato bites surrounded by a breadcrumb coating that’s deep fried to golden brown perfection," the website shared. "This time around, the returning fan favorites are available in an eight-piece order for a suggested price of $4.98 (may vary). You can find Cheesy Tots at select participating Burger King locations nationwide for a limited time."

Unlike Wendy's, Burger King has, at least for now, given up on the idea of reformulating its fries and marketing them as better than McDonald's. That's probably a fool's errand, so offering something else might be a better strategy. Cheesy Tots may not make people forget McDonald's french fries, but the offering might entice some customers to opt for the "Home of the Whopper" over the Golden Arches.