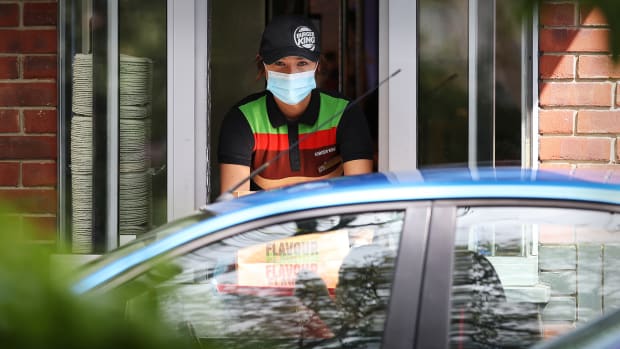 Both fast-food chains have tried to offer something very different (and Burger King's new menu item certainly counts as that).

Fast-food chains have a long history of trying to serve as broad an audience as possible. That has led to endless experiments designed to expand their audience beyond the people who crave unhealthy food or those who value convenience over their health.

A McDonald's (MCD) - Get McDonald's Corporation Report Big Mac or a Burger King Whopper has never been marketed as good for you. When you drop in on Ronald McDonald and friends for a meal you understand that if you do that too often, you'll end up looking like Grimace. The same goes for visiting the Restaurant Brands International (QSR) - Get Restaurant Brands International Inc. Report chain -- you understand going in that this is not health food.

That has not stopped either fast-food giant from endlessly trying to either offer healthier choices or at least appear to be doing so. That's why McDonald's has a long list of salads that few people bought which were quickly dropped and why apple slices remain a rarely-ordered Happy Meal side option.

Burger King has tried many of the same things and has perhaps had more success with its quasi-healthy plant-based Impossible Whopper than McDonald's has had with its more-or-less doomed McPlant.

Now, Burger King has doubled down on plant-based burgers offering a new version of one of its classic sandwiches.

Plant-based burgers ostensibly serve an audience looking for a healthier choice when visiting a fast-food chain. The problem is that the people who visit McDonald's and Burger King don't actually appear to want this and both chains are limiting their chances for success with these products.

While both McPlant and Impossible Whopper contain vegetarian ingredients, neither is handled in a way that a true vegetarian would actually consider eating either one. Both are cooked on the same grill as their meat-based counterpart. That makes these burgers a choice for people who don't mind meat, but would prefer something a little healthier from a fast-food chain.

And, that's the second problem. Neither McPlant nor Impossible Whopper offers a significant health advantage over their meat-based counterparts. It's more about the concept of the burger being plant-based than it actually being a healthy choice.

So, the target audience for McPlant and Impossible Whopper is meat-eaters visiting a fast-food chain who prefer to eat an equally unhealthy sandwich that doesn't have meat.

Burger King Wants to Do the Impossible

Burger King has committed to offering plant-based fare more than McDonald's has. McPlant has only been rolled out to 600 U.S. McDonald's locations and early sales trends suggest that number won't grow (and it may quietly shrink). The Home of the Whopper has done better by its plant-based sandwich offerings. It has Impossible Whopper on its menu nationwide and has offered the Impossible Patty on some of its limited-time-offerings.

Now, Burger King has taken the bold step of adding another plant-based burger that takes dead aim at McDonald's.

The chain will begin selling the Impossible King (a plant-based version of its Big Mac knockoff) June 27, Chewboom reported.

Never mind the curious use of "melty" over "melted" in the description, this new menu item seems like a good choice for vegetarians and healthy eaters until you remember the part about it being cooked on the same grill as beef burgers.

"The Impossible Whopper is flame-grilled on a surface shared with conventional meat. Please check with a participating Burger King® restaurant to confirm if any requests for an alternate preparation can be accommodated,” Impossible shared on its Twitter page,

Those alternate preparation ideas seem impossible since Burger King only has one grill. Both McDonald's and Burger King keep trying to offer healthier fare, but mostly just trying to look like they do. This latest Burger King offering simply repeats that same script.