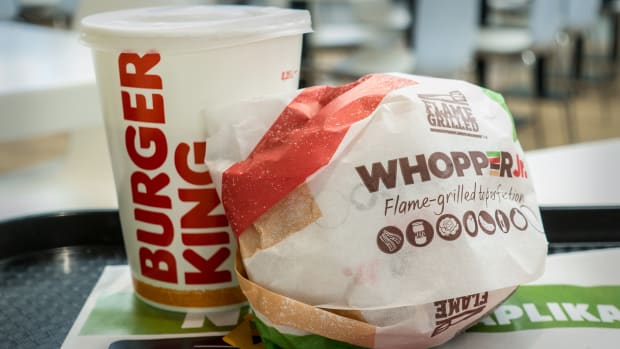 The "Home of the Whopper" sees a future where its menu looks very different.

Fast food generally means greasy and bad for you.

Few people visit a McDonald's (MCD) - Get McDonald's Corporation Report, Burger King, or a Wendy's (WEN) - Get Wendy's Company (The) Report looking for a healthy meal. And, in a broad sense, those who visit any of those chains' U.S. locations won't have an easy time finding it, if they're looking for healthy choices.

Wendy's does offer some salads that are actually not bad for you and you could get a plain baked potato, but much of the menu is built around burgers, fried chicken, and french fries. McDonald's does not even offer salads in the U.S. It has tried to add them to the menu (McSalad shakers anyone?) but the chain's audience has largely not been interested.

Basically, while they have made some concessions when it comes to kids'  meals, McDonald's and Wendy's know what they are and who their customers are. Both understand that the people coming through the door want a Big Mac or something with the word Baconator in the title.

Burger King has used the United Kingdom as a sort of testing ground for meat-free products. The chain actually turned one London location into a fully vegan restaurant. That's, of course, a bit of a publicity stunt, but it's also a chance to test out whether customers will actually buy vegan "chicken" nuggets, a "chicken" katsu burger, and other vegan choices alongside its Impossible Whopper.

The chain has also committed to selling a 50% meat-free menu in the U.K. by 2030. That's still a ways off, and the U.K. is not the U.S., but Burger King seems to believe its future may not be as meat-based as Wendy's and McDonald's appear to believe there's to be.

McDonald's, it should be noted has had more success with McPlant and other vegan/vegetarian options outside of the U.S. The McPlant remains on many of its menus outside its home country.

Fast food may actually be able to make the switch -- at least for some products -- to vegan because it's the condiments that deliver a lot of the taste, not the burger patty.

“Fast food is 100% the best area to switch to vegan,” vegan chef James Lewis told The Guardian: “The chains are often sneered at by people but they are setting the trends here. There’s no point starting a vegan chain because once McDonald’s figures out how to make a good vegan burger, they will think: ‘What’s the point in the cost of keeping all these animals when we can make it just as good and grow it in the ground?’

That's a pretty optimistic view of the vegan market, and the U.S. has been less open to meat-free options than other parts of the world, but Burger King's U.K. efforts may eventually pay off in the U.S.

Menu items that become a hit in the U.K. may eventually make their way across the pond. And while vegan nuggets seem like a stretch for a U.S. Burger King, McDonald's, or Wendy's, the day may come when the audience demands them. If that happens, Burger King will be well-positioned to take its efforts in England and bring them home.