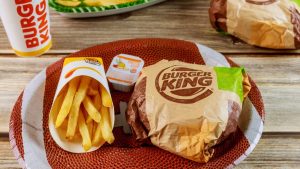 Burger King UK has announced plans to make half of its menu meat-free by 2030. It’s part of the fast food chain’s efforts to curb emissions.

As part of this goal, Burger King is rolling out vegan nuggets across the UK from tomorrow (January 5, 2022).

The new nuggets, made from soy, are certified by The Vegan Society. They will join Burger King’s meat-free Rebel Whopper, which the chain debuted two years ago.

“We’re pleased to announce the launch of BKUK’s new vegan nuggets across our menus nationwide – a significant milestone for the company and an important next step in achieving our target of a 50 percent meat-free menu by 2030,” Murdoch said in a statement.

“Adapting to customer preferences is a key focus at Burger King – we are committed to helping our guests make good decisions about what they eat and drink and providing them with informed choices – whether through clear nutrition and allergen labelling, or by offering vegan and vegetarian options.

“The launch is another positive step in reducing our carbon footprint and driving innovation in our menus in response to growing demand for meatless alternatives and products with no animal protein in the UK.”

Sustainability concerns are driving the plant-based push. The burger titan says keeping 50 percent of its menu meat-free will help lower its greenhouse gas emissions by 41 percent.

The claim is backed up by an ever-growing bank of research. In November, a study concluded that meatless diets are responsible for 59 percent fewer emissions.

And in 2019, the most comprehensive analysis of farming’s impact on the planet led researchers to encourage the uptake of vegan eating.

“A vegan diet is probably the single biggest way to reduce your impact on planet Earth, not just greenhouse gases, but global acidification, eutrophication, land use and water use,” said Joseph Poore, who led the study and went vegan himself whilst undertaking the research.

The post Burger King UK Pledges To Make Half Of Its Menu Meat-Free By 2030 To Lower Emissions appeared first on Plant Based News.