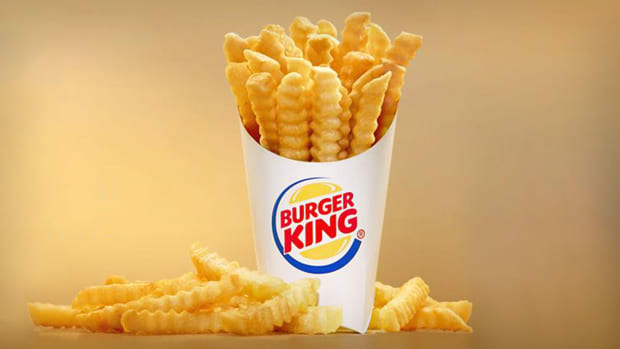 Forget fries and onion rings, the Home of the Whopper has a new idea for your side dish.

Few things go together as well as a burger and fries. It's hard to even picture a hamburger without a side of french fries and most fast-food efforts to make a change to this classic duo have gone embarrassingly wrong.

McDonald's (MCD) - Get McDonald's Corporation Report, for example, offers apple slices as an alternative to fries in its Happy Meals. Is any kid happy when mom or day makes that switch?

Many fast-casual and sit-down restaurants let customers substitute a side salad or even a vegetable for fries. That might be a healthy choice, but it's not one anyone makes because they like a side salad more than they like fries.

Burger King even once tried to make french fries more healthy by offering "Satisfries," a new take on the old favorite that had fewer calories. That, as you might imagine, was an epic disaster. Customers did not want healthier fries and that experiment lasted less than a year.

Now, amidst global potato shortages, the chain has decided to try another french fry alternative. It's almost certainly not what you think, but it may become a popular menu item.

Burger King fries aren't as beloved as the ones offered by chief rival McDonald's. They may not even be as well-liked as the ones Wendy's (WEN) - Get Wendy's Company Report offers (after a recent reformulation designed to make them closer to what McDonald's offers),

New fry recipes are something Burger King has tried as well (and likely will try again),. Now, however, after a potato shortage caused the chain to limit fry availability in its restaurants in Japan, those same locations have added a new fry alternative to their menu.

"The tempting combination is called the Daitai Potato, or 'Sorta Potato,' Set, since it aims to provide the salty, starchy satisfaction of a bag of French fries despite its spud-less status. Instead of fries, the Daitai Potato Set will provide you with a bag of Baby Star Dodekai Ramen, a crunchy dried ramen noodle snack that’s popular enough to be a big seller on its own, even without the added incentive of a flame-grilled companion burger."

Can Ramen Be an Answer for Burger King?

While dried ramen isn't an odd menu addition in Japan, it's not being added to the menu because the chain expects a lot of customers to opt out of ordering fries. Instead, ramen has been added to mitigate the potato shortage.

The new menu addition won't become a huge hit, but it might be popular with a small percentage of the audience. That could give the company some breathing room when it comes to its supply of potatoes. Every order of ramen that sells is an order of french fries that doesn't, which could help mitigate the supply chain problems when it comes to fries.

Dried ramen noodles won't become the rum to a hamburger's Coke, but they could become a menu success. This isn't McDonald's offering apple slices that nobody wants. It's closer to Burger King selling onion rings because some customers will make the switch, even if it's only some of the time.

This isn't about replacing french fries -- pretty much no side dish has a chance of doing that. Instead, it's about offering another salty, tasty choice that might help the chain get through the (hopefully) short-term potato shortage.