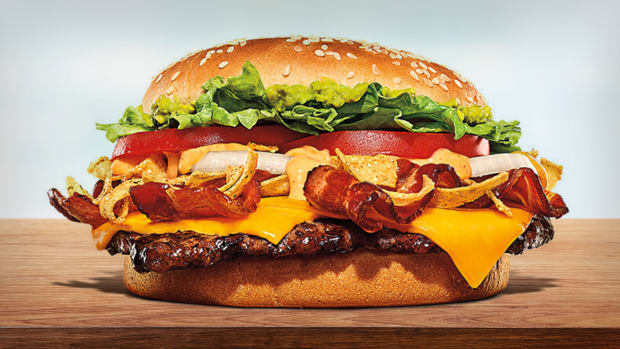 The latest version of the signature Whopper taps into a major food trend.

There have been a lot of new Whoppers in the works at Burger King lately.

For the latter, think Whoppers topped with currywurst and fried herring, bratwurst and a nougat creme and marmalade that were all launched by Burger King Germany as part of a Mother's Day promotion meant to bring to life the worst of pregnancy cravings.

In many ways, Burger King locations abroad have been doing more innovative things than at its home base.

From the four-cheese "Ugly Burger" to the four-patty "Yeti Burger", Burger King Japan in particular has been churning out very innovative (and, in some cases frightening) interpretations of what Americans like to eat.

What's The New Whopper This Time?

The latest Burger King Whopper comes with an ingredient that is often used to mock millennials.

As reported by food site Chewboom, the Avocado Bacon Double Whopper has been spotted at some locations across the country.

For those who want all the meat, there is also the Avocado Bacon Double Whopper with two patties.

Other than the fact that some die-hard Burger King fans have been posting stealth photos of the burger on Reddit, very little information on this Whopper has yet been made public.

Chewboom has been asking anyone who saw (or, better yet, tasted) this Whopper to contact them with information about cost, availability and whether they consider it a hit or a flop.

Avocado is a popular and beloved ingredient that may help draw in a certain type of visitor to Burger King.

The green fruit has been picked on by conservatives trying to claim that young people cannot afford housing because they spend all their money on "frivolities" like avocado toast.

But despite the Southwestern kick from the avocado and tortilla chips, the Avocado Bacon Double Whopper does not appear to steer too far from the regular Whoppers sold in American Burger Kings.

In many ways, the area in which the fast-food chain leads the pack is in its vegetarian and other plant-based offerings.

While McDonald's  (MCD) - Get McDonald's Corporation Report rollout of the McPlant has hit numerous snags and road bumps, Burger King has had the Impossible Burger on its menus since 2019 and opened a few fully vegan restaurants in the last year.

With the U.S. plant-based foods market projected to hit $10.7 billion by 2027, this may be the space where innovation is most sorely needed.

Fast-food chains that get an early start and offer more than what has traditionally been the chain's single veggie sandwich will be able to get an access to an ever-increasing market.