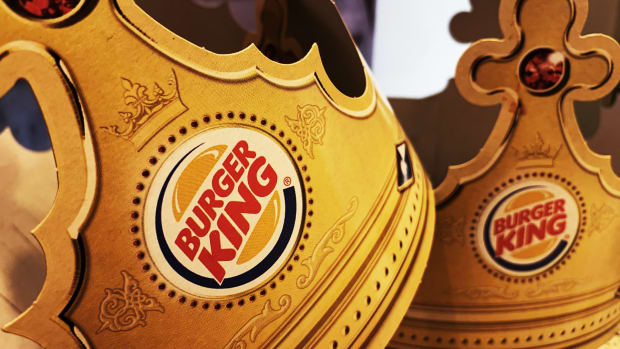 In the 1980s fast-food innovation exploded.

McDonald's (MCD) - Get McDonald's Corporation Report had perhaps the biggest invention when in 1983 it added Chicken McNuggets to its menu. That change was revolutionary because while many local pizza places and sandwich shops had chicken fingers on their menus, the nugget was not really a thing yet, at least on restaurant menus.

When McDonald's made its big move, Burger King did not immediately follow by adding its own chicken nuggets. Instead, it refocused its menu on its nonburger sandwiches. Unlike McDonald's, which at the time offered only burgers and the Filet O' Fish, Burger King had a line of alternative sandwiches that had been around since 1979.

The menu varied, but at various times the company offered a ham and cheese, a veal parmesan, an Italian chicken sandwich, and what's now thought of as Burger King's Classic Chicken Sandwich. Served on a sub-like roll, the chicken sandwich looked different than anything the fast-food world was offering at the time.

And while a huge piece of fried chicken with mayo and pickles served on a version of a hamburger bun has become the standard for a chicken sandwich (thank you Popeye's), Restaurant Brands International's (QSR) - Get Restaurant Brands International Inc. Report  Burger King for decades had set the standard for fried-chicken sandwiches.

Now, the fast-food chain has a new take on the classic, and some fans are going to be very happy.

McDonald's has made chicken a focus of its menu by recently adding the Chicken Big Mac. That comes after the chain recently failed with another attempt to do something different.

While McDonald's struck out with its plant-based McPlant burger, Burger King has achieved enough success with its Impossible Whopper that it has at least kept it on the menu. Now, the chain has added another plant-based sandwich that's different than anything on its chief rival's menu.

"For the first time ever, Burger King is offering a plant-based version of their iconic Original Chicken Sandwich with the introduction of the new Impossible Original Chick’n Sandwich" at select locations in Cincinnati, starting Aug. 22, Chew Boom reported.

Aside from the plant-based nonchicken patty, the sandwich follows the same recipe as the classic chicken sandwich, It's served on a long sesame seed bun and topped with shredded lettuce and mayonnaise.

Burger King has been working with Impossible since 2019 and added Impossible Chicken nuggets in some markets in 2021.

Burger King has dropped to No. 3 among fast-food burger chains behind both McDonald's and Wendy's (WEN) - Get Wendy's Company (The) Report. That's a problem Restaurant Brands Chief Executive Jose Cil plans to address with the chain's "Reclaim the Flame" initiative.

And during the company's second-quarter-earnings call, he made clear that the "Home of the Whopper" is seeing some positive signs.

"During the quarter, we saw notable improvements in key operational metrics, steady progress across our digital capabilities and consistent execution of our marketing plan," he said.

"On operations, you heard us stress the importance of precision and creating a culture of operational excellence at Burger King U.S. We continue to see the benefit of recent menu- and process-simplification efforts that are driving efficiencies in the restaurants, resulting in favorable operational outcomes and an improved guest experience without a near-term negative impact to sales related to the product reduction."

Simplifying the menu has not stopped Burger King from innovating. The chain has steadily added and tested new items all year. And it has seen some improvements in its results.

"We saw a 0.4% increase in comparable sales in the quarter, driven by a net benefit from our focus on core offers, including removing Whopper from core discount during the first quarter, a strong value platform with a $5 Your Way meal and positive contribution from digital and delivery channels," the CEO said.