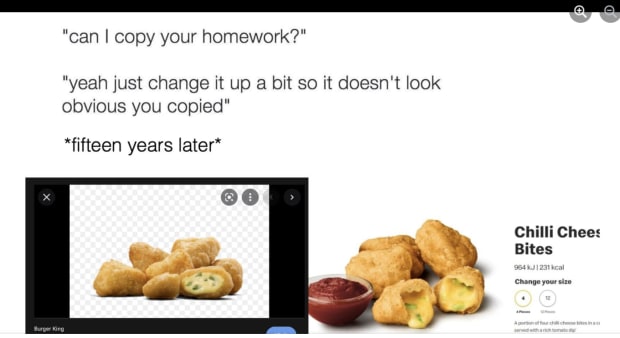 The fast-food companies have taken their rivalry to new levels over a different take on a side dish.

Ali vs. Frazier, Hulk Hogan vs. Andre the Giant, Coke v.s Pepsi, Red Sox vs. Yankees, Nick Saban vs. every coach who has ever worked for him, and, of course, McDonald's (MCD) - Get McDonald's Corporation Report versus Burger King represent some of the greatest rivalries in the world. Most rivalries, however, come with a begrudging respect.

When New York Yankees fans chant "who's your daddy?" at Boston Red Sox legend Pedro Martinez, it's both mocking, and acknowledging that the pitcher deserves their attention. In the fast-food world McDonald's and Restaurant Brands International's (QSR) - Get Restaurant Brands International Inc Report Burger King have the same kind of hard-earned respect.

That's partially because the two chains have essentially been copying each other since they started operating. Both began as models of consistency before Burger King upped the stakes by introducing The Whopper, a move McDonald's countered with the not-that-different Big Mac.

It's a script that plays out regularly, one fast-food giant introduces something new and the other copies it with a few changes. That's why Burger King serves its signature breakfast sandwich on a croissant, not an English Muffin -- that makes the Croissan'wich different from the Egg McMuffin.

Now, Burger King thinks its rival has gone too far.

While imitation may be the sincerest form of flattery, Burger King thinks McDonald's has gone too far. The Home of the Whopper took to social media to troll its rival offer a new item on its menu in the United Kingdom -- Chilli Cheese Bites. The side dish, contains a portion of chilli cheese bites in a crispy batter, served with rich tomato dip and it can be purchased in quantities of four or 12 bites.

Burger King called foul when the item came out, noting in a Facebook post that the new McDonald's menu item looks an awful lot like its own Chilli Cheese Bites (yes, they both spell chili with two "l"s). The Independent reported on the controversy:

In a recent Facebook post, Burger King created a meme out of the bites, which first reads: “Can I copy your homework?” In response, the person in the situation would say: “Yeah just change it doesn’t look obvious you copied.”

The meme includes a photo of an appetiser on Burger King’s menu, which is also called Chilli Cheese Bites, side-by-side with a photo of McDonald’s bites. The different bites’ shape and colour appear to look identical to each other in the two photos.

“Not like it’s been on our menu for 15 years…,” Burger King wrote in the caption.

Burger King's Chilli Cheese Bites come in a six piece serving and are “crispy coated with smooth and spicy cheese inside” with “a unique taste of chilli with every bite.”

McDonald's and Burger King Often Copy Each Other

McDonald's appears to be violating traditional fast-food norms with its exact copy (at least visually), same name Chilli Cheese Bites, The two chains have very similar menus and if one succeeds with something the other generally copies it. Burger King, for example, has the "Big King," its own take on the Big Mac that's more copy than homage.

In reality, there's only so many ways to serve the same thing. And, if McDonald's succeeds with a product then fast-food fans more or less expect Burger King to try a variation of it. That's, perhaps, why the two chains have menus that look more or less the same with only a few pretty minor differences.

Yes, Burger King has onion rings and mozzarella sticks but that's mostly because McDonald's has the better-loved fries of the two chains and neither alternative side dish has ever been a major hit. McDonald's efforts to copy Chilli Cheese Bites seems more lazy than vindictive. The chains could have at least slapped a "Mc" on the name to differentiate its take on the product, but copying a side dish seems like a pretty minor crime from a company that has long celebrated hamburger theft with its beloved Hamburglar character.

This may be a cheesy move by McDonald's, but it's hardly the chain putting out the McWhopper or really even the equal to what Burger King did with the Big King. Yes, it's copying, but both chains have more or less made that their policy since the 1960s.