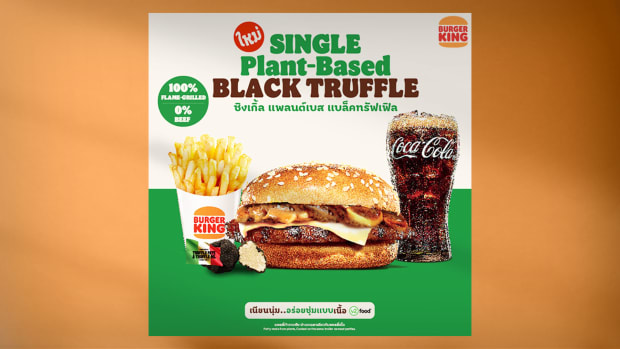 Fast-food giant Burger King has a new product that might solve a menu problem.

That's why McDonald's has stopped selling salads, after trying a variety of them (remember McSalad Shakers?) over the years.

People say they like the idea of fast-food burger chains having healthier choices, but when they actually visit one, they almost always opt for a Big Mac, a Whopper, or another classic menu item instead of a salad or something else vaguely healthy.

That's why Burger King's Impossible Whopper has been at best a modest success in the U.S. and McDonald's' plant-based burger, the McPlant, has not been a big success (to be kind).

Solving that may require that the chains borrow a tactic both have used in India and other global markets -- make plant-based food where the appeal isn't health-related.

Essentially, give the people what they say they want from fast food -- decadence -- and do it in a way that's not as preachy as how a lot of healthy(ish) fast-food products have been marketed.

That's at least partly the philosophy behind one Burger King menu item.

Few ingredients speak to decadence as much as a truffle. These fancy mushrooms cost a fortune and are generally served only as an add-on (think a sauce or a small amount ground on top of an entree) in high-end restaurants. Burger King Thailand's  plant-based burger has a truffle-based sauce.

The fast-food chain shared the details on its Burger King Thailand website.

"Single Plant-Based Black Truffle is made with a flame-grilled plant-based patty (100% made from plant), topped with Swiss cheese, Black Truffle sauce imported from Italy, and savory champignons all served on a toasted sesame seed bun. This value meal includes a regular french fries and a 16 oz Coke.

"Plant-based patties are made from plants, cooked on the same broiler as other Burger King menu [items]."

So, like the McPlant in the U.S., this plant-based burger isn't for actual vegans or vegetarians (who tend not to like their sandwiches cooked next to actual meat).

It's All About Fast-Food Illusion

Burger King and McDonald's have tried over and over to launch healthier menu items. They have all gone the way of the McLean, a lower-calorie take on a hamburger, and Burger King's Satisfries, a similarly disastrous effort made to make lower-calorie french fries.

The challenge for these chains is giving customers a healthier (or at least healthier-seeming) option that people actually want. When the subject is plant-based meat, there's a big dis connect between what people say they want and what they order.

It has already been proven that a plant-based Whopper or Big Mac, especially one cooked on the same grill as beef patties, has limited appeal. The Black Truffle may not be the exact item to bridge this divide in the U.S., but it may show a path forward.

Offering healthier and vegan/vegetarian options probably requires doing more than knocking off your regular menu items with plant-based copies. It may make more sense to lean into items that are naturally meat-free.

It's also, of course, possible, maybe even probable, that most people who eat at Burger King and McDonald's may say they want healthier choices but don't truly mean what they say.