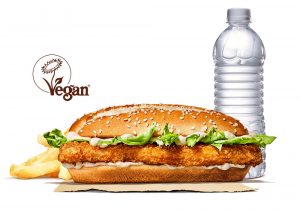 Burger King UK has added a vegan ‘chicken’ burger to its menu, offering a new alternative for meat reducers and vegan eaters alike.

The new burger was in development for years under the watchful eye of the Vegan Society. The aim was to ensure The Vegan Royale matched up to the same flavour of the restaurant’s chicken counterpart and could be enjoyed by all.

The plant-based chicken, derived by The Vegetarian Butcher, is the centrepiece of the burger, which also includes vegan mayo. It has been certified by the Vegan Society.

Soco Nunez, Marketing Director of Burger King UK said: “At Burger King UK we’re all about delivering great tasting food for our customers, so we’ve purposefully taken our time with the Vegan Royale to make sure it’s the best on the market.

“In fact, we would go as far as to say it’s an identical taste experience to the original Chicken Royale.”

The Vegan Royale will be joined a newly formulated and animal product free Plant-Based Whopper made up of a flame-grilled, soy-based patty.

The brand’s fries are also certified by the Vegan Society.