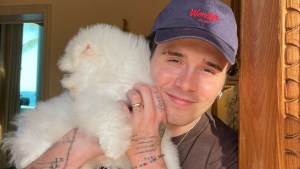 This week, Brooklyn Beckham – the eldest son of celebrity couple David and Victoria Beckham – posted an image of himself broadcasting vegan sneakers.

Emblazoned VEGAN on the soles, the sports shoes are part of Superdry’s Basket Lux range – which are, naturally, vegan-friendly.

But whilst some welcomed another prominent face flying the vegan flag on social media, others hit out.

That’s because the 22-year-old photographer was paid to promote them. “Lower your fashion footprint,” he writes in the post, with the hashtag “#ad,” meaning the star will have received reward for their promotion.

But it was primarily because just three days prior, in a separate Instagram post, Beckham uploaded a video of him cooking a beef steak.

He said it’s one of his “favorite dishes” in the short episode of Cookin’ with Brooklyn, in premiere to his 13.1 million followers.

Unsurprisingly, onlookers were not best pleased and cited hypocrisy. One user wrote: “I’ve followed your parents’ journey since I was 15 and wish you all the best!

“But seriously, you cannot be cooking steak one day and promoting vegan the next! This truly does not make sense!”

“Babe you literally cook steak all the time,” said another.

Elsewhere in the debate, questions were raised over Superdry’s choice of influencer to market the sneakers. The company was called out for targeting vegans “through carnivores,” and that this “doesn’t make sense.”

This remark was met with further support: “Veganism is an animal rights movement, Superdry. Maybe try using someone that represents the movement for the campaign.”

People also noted that vegan leather isn’t always environmentally friendly, despite the nod made in the post to “#sustainablefashion.” That’s because leather without animal skin can be made from plastic instead, such as polyurethane or polyvinyl chloride.

Superdry’s sneakers in question carry The Vegan Society’s Vegan Trademark. The brand states that the designs have passed 172 checks as part of the process.

It also claims to have used “high-quality” and “contemporary” materials but the exact origins of which remain hidden from customers’ views via its website.

While some synthetic leather buyers may be pleased to have avoided the ethical implications of killing animals for their skins, an estimated 13 million tonnes of this type of vegan leather is plunged into the ocean each year – according to Harper’s Bazaar.

However, even when it is made from those materials, the environmental footprint is largely considered to be significantly lower than that of animal leather.

But some argue that the pollution caused by microplastics is underestimated. And, urge customers to choose natural vegan leathers instead.

Such fibers are made from the likes of apple cores, cork, pineapple, banana, leaves, and more.