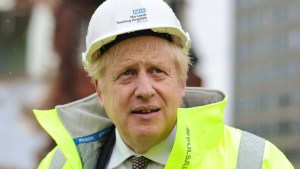 Prime Minister Boris Johnson is being pressed for ‘deliberately’ not mentioning animal agriculture and meat consumption in a vital environmental policy.

Despite urgent calls for the PM to encourage slashing meat intake by half, there’s a ‘glaring omission’ in the Net-Zero Strategy: and The Vegetarian Society is not happy about it.

Boris Johnson set out the long-awaited Net-Zero Strategy earlier this week. In essence, it’s a caucus of plans to help the country reach net-zero carbon emissions.

And the 368-page report will place the UK as the world leader in the ‘race’ to hitting the target, according to Johnson.

But the politician was called out for leaving out any recommendations to reduce meat intake, in order to help reduce the emissions.

And as a result, The Vegetarian Society reacted. The organization penned a letter to the PM ‘seeking to understand why the issue of diet and animal agriculture appears to have been deliberately omitted’.

Why was meat reduction not mentioned?

“And, that the government’s own National Food Strategy suggests a 30 percent reduction in meat consumption by 2030 in order to hit climate targets, it is difficult to understand why this issue has not been made a central plank of the strategy.”

In such a ‘critical’ decade in the fight to mitigate the climate emergency, reducing meat intake must be a part of the strategy, McIlwain warns.

He added: “Choosing more plant-based meals over meat is one of the quickest and easiest ways anyone can reduce their carbon footprint. And, collectively as a nation that would create a huge impact.”

You can read the full strategy here

The post Boris Johnson Pressed On ‘Glaring Omission’ Over Meat Consumption In Net-Zero Plans appeared first on Plant Based News.