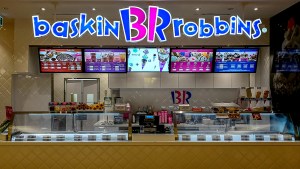 The brand says it is the first major national ice cream shop to offer oat milk-based flavors that meets the ‘creamy consistency of traditional ice cream’.

Shannon Blakely is the Vice President of Marketing and Culinary at Baskin-Robbins. She said: “We’re a brand that’s all about creating new flavor experiences.

“With so many people living plant-based or flexitarian lifestyles today… We couldn’t be more excited to launch our new oat milk-based option.

“We’re so passionate about this new base and Flavor of the Month as it’s not just an evolution of our offerings, but a sign of our passion and commitment to creating what’s ‘next’ in frozen desserts.”

Its Chocolate Chip Cookie Dough and Chocolate Extreme ice cream are made with coconut oil and almond butter.

*All of Baskin-Robbins menu items (vegan and non-vegan) are prepared in the same area. Baskin-Robbins cannot guarantee that there will be no cross-contact between products or ingredients.