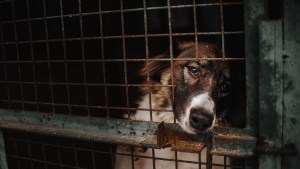 A council member has proposed a bill outlawing the consumption of dog meat in Seoul, the capital city of South Korea. It follows ongoing concerns about animal welfare violations within the trade.

The municipal council member, Yang Man-gyu, urged Seoul’s mayor to implement a city-wide ordinance to ban consumption of the product. And, to help foster a broader culture that prioritizes dog welfare within the city.

And nearly 60 percent said they back a legislative ban on the industry.

Despite this, the trade still has a footing in South Korea’s food system. Up to 1.5 million dogs are raised for food in the country every year, the HSI/Korea-commissioned research says. Further, dog meat is served in an estimated 3,388 restaurants. And 436 of those are in Seoul.

There, dogs are often sold as soup after being electrocuted.

Dog meat is banned in a number of places, including Hong Kong, Singapore, Taiwan, and Thailand. Despite this, an estimated 30 million dogs lose their lives to the industry every year.

HSI/Korea is one of the growing number of charities working to free the animals from the industry. The animal protection organization says it has rescued more than 2,500 dogs from South Korean farms since 2015.

It has also helped permanently close 17 dog meat farms. In a press release, the charity says it achieved this by working with farmers who were “eager to exit the controversial and dying industry.” The organization assists former producers in entering new fields, such as chili plant growing or water truck delivery.

In a statement, they said: “We welcome Seoul city’s proposed bill calling on the mayor to devise a plan to prohibit dog meat consumption, and its explicit recognition that all dogs are cherished family members who must be protected from the inherently cruel dog meat industry.

“As pet ownership rises exponentially in South Korea, so must our responsibilities to protect them from cruelty and exploitation,” they added. More than six million pet dogs are now living with Korean families, the organization says.

“We hope that a ban in Seoul will pave the way for an end to the brutal dog meat industry across the country, in line with public sentiment and national and global trends.”

The bill is slated to be voted on next month.