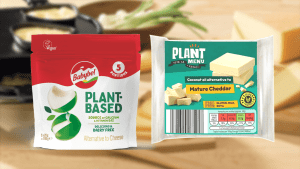 Vegan cheese is having a moment in the UK right now, as two major brands step into the sector for the first time. Dairy giant Babybel, known for its mini cheese wheels, has debuted its first-ever vegan cheese. Meanwhile, budget-friendly supermarket chain Aldi unveils its first nondairy cheese line in the UK – just in time for Veganuary.

The company had yet to venture into the plant-based scene, but will take the leap on January 1, 2022, by launching vegan cheese wheels in Sainsbury’s (£2 for a pack of five).

The product is made from coconut oil, and is free from artificial colors and preservatives. It’s a source of calcium and vitamin B12, and is approved by the Vegan Society.

Further, each wheel is wrapped in Babybel’s iconic wax coating, swapping out its usual red coloring for green.

“We’ve seen overwhelming demand for the development of a vegan-friendly Babybel over the years, and with the plant-based market continuing to grow substantially, the new launch is perfectly timed to meet this consumer appetite,” they said to The Grocer. Notably, in September, a Mintel report revealed that around one in three Brits are drinking dairy-free milk.

Babybel noted it hopes the timely Veganuary launch will “unlock incremental sales.” The 31-day initiative sees people around the globe pledging to go vegan throughout January.

The campaign’s popularity has skyrocketed in recent years. Last Veganuary, a record-breaking 582,000 people signed up.

Also keen to tap into the hype surrounding the campaign, Aldi is welcoming its first own-label vegan cheese.

The products will be available from Aldi’s Plant Menu range, which currently offers meat-free meatballs, onion and rosemary sausages, vegan beef pasties, and plant-based burgers, among others.

Aldi is hailed among budget-friendly shoppers for its comparatively low prices. A glance at the chain’s competitors finds that its new vegan cheese is no exception.

And Sainsbury’s free-from cheddar, also made from coconut oil, goes for £2.25 per 200g. As does Marks & Spencers’ version, leaving Aldi’s 47 percent cheaper than both supermarket chains.